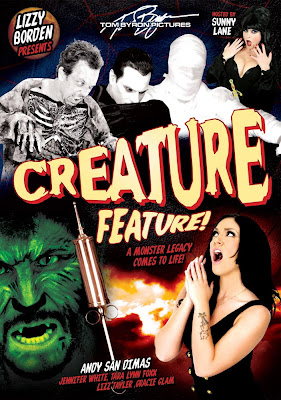 Tom Byron Presents : released a DVD just in time for Halloween stapled after the Universal Studios monsters. For me there are only but three kinds of porn flicks. There are the classic 70's & 80's films. There are "fuck tapes" which is what I call the porn of today. Basically just shot on video scenes of people having sex, which I'm not a big fan of but they serve their purpose. Then there are modern digital flicks that are trying to be movies, like Pirates and This Ain't The Brady Bunch. Usually I'm not a fan of these either but every once and a while one will strike my personal interest, like The Texas Vibrator Massacre. Creature Feature fits somewhere in between a fuck-tape and a modern wanna-be movie.
Creature Feature was directed by Lizzy Borden who does a lot of films for Tom Byron. She also was in the incredibly shitty shot on video Terror Toons. If you have not seen that one, you are lucky. Stay away at all costs. Anyway Creature Feature is supposed to be like an anthology film and the short little stories are brought to us by a girl on a couch in an Elvira get-up. The Elvira character was played by Sunny Lane who has a pretty big porn filmography including titles like Not Bewitched and Tom Byron's other horror-porn-parody The Human Sexipede. We have a little intro before each fuck session which is digitally enhanced with some fake grain and the color is yellowed out to make it look old. The first segment is The Bride Of Fuckenstein and Evan Stone plays the mad scientist and he brings a pretty good looking girl with real boobs back to life in the classic Bride Of Frankenstein look.
The second segment is the Mummy which was ultra cheesy and the intro was just awful. A girl is running around in a cave with a tiki torch and finds a Mummy. She brings the Mummy to life with a blowjob and then rides the hell out of him. The Mummy costume pretty much consists of a pair of beige cacky pants and some toilet paper.
Then we got the Dracula scene which really doesn't need much explaining. This is followed by The Wolfman. The Wolfman actually got a laugh or two out of me. The make-up wasn't even half bad and that's pretty sad because I have seen some real movies with much worse werewolf makeup. The Wolfman is sucked and fucked back to normal. Say goodbye to the hairy palms.
The final segment is called Night Of The Fucking Dead Zombie and its a Night Of The Living Dead parody. Tom Byron plays the zombie in this scene and he gets it on with a obnoxious brunette who is way over acting or should I say over orgasiming. The one good thing I can say about this chick is that she has real boobs. Actually I think there was only one fake set of jugs in the whole movie and that's always a plus for me. The zombie segment wasn't all that great I prefer Night Of The Giving Head.
All in all Creature Feature is just another fuck tape but between the Elvira character and the silly monster sexcipades it was an alright watch. 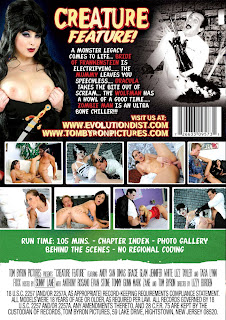