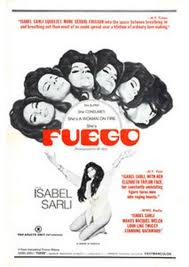 Isabel Sarli plays a woman on fire in this Argentinian Sexploitation film. She is hot as hell and we get to see plenty of her. Apparently this Spanish beauty has done over 30 films, most of which her husband (Armando Bo) directed. This is the only one I have seen from the duo of Argentina sleaze but I would like to see em all because I just cant get enough of  the big breasted brunette.
Fuego opens up with Isabel Sarli frolicking in the nude on a beach with her lesbian lover. Armando Bo watches the voyeurism in true creep fashion. When the lesbians realize they are being watched they run off. Its not long before Bo and Sarli meet again and they almost instantly have a love scene in front of a chicken coup. Bo convinces Sarli to marry him and she agrees. Now that the couple is married we are treated to the bodacious body of Isabel Sarli pretty often and it seems every time she is in the nude we get to listen to the equally awesome Fuego theme song. After watching this movie you will be singing the song in your sleep. Speaking of sleep, Isabel Sarli is sleeping with all of the men in town, behind her husbands back of course. She is warned by her lesbian lover that she will drive her husband crazy and it will lead to her death.
I know what you're thinking... you're thinking that Sarli is a slut! Well its not her fault in this one. Even her gynecologist says "its a abnormality in the genitals." Sarli suffers from nymphomania and although her heart belongs to her husband her body belongs to other men and we know this because she screams "I need men! I need men! I need Men" over and over again.
Fuego eventually takes a depressing turn when Sarli decides the only cure for her is death. She tries to convince her husband to kill her but he can't go through with the deed. I wont give away the ending but I will just say its not a happy one.
Fuego is my kinda movie. Hot brunette's with big 60's pre-silicone boobs and a downer ending and its all strung together with great head bopping Spanish music. 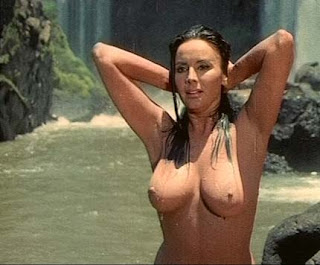