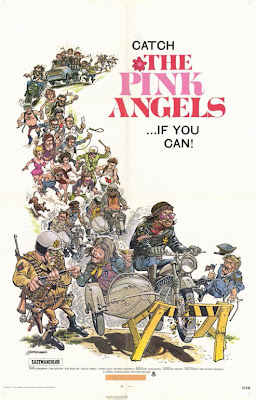 If I had to pick what film genre might be the most manly of all I would say it would either be The Western or The Biker film. Biker films, exploitation or (Easy Rider) mainstream usually portrays rugged men on the road trying to find freedom. This might not necessarily be the aspect that makes these movies so macho but the bar fights, the gratuitous pot smoking and beer chugging usually helps these films fall into the tough-guy category. Not to mention that theres usually lots of naked women on display in either sex scenes or rape scenes and big bad-ass dudes with dirty clothes and rugged beards.
The Pink Angels on the other hand strips the biker film of all its manliness. Its about a gay biker gang who are on their way to a "Drag Ball Party" in L.A. which is as I'm sure you guessed a drag queen party. So in a sense this one holds onto the basic foundation of a biker film since they are a group of men on the road in search of "Freedom" but its hard to imagine a audience for this movie. The biker/exploitation fans certainly aren't going to dig this because its a comedy and theres absolutely nothing tough about this movie. Me on the other hand I like it. Mainly because its a 70's oddity and its just so strange. Its very obvious that the Pink Angels is a comedy but it also seems like there is some kind of message that just didn't come off right in the movie. Was this thing made by a gay man? If so the message comes off very twisted. It ends in Easy Rider fashion with the six gay bikers being hung by fascists. Instead of rednecks, the police and military are ganging up on the queer gang and they are hung in the films final.
The film works better as a weird piece of history rather then a comedy because most of the humor comes off unintentionally and the scenes that we are supposed to laugh at just seem awkward and uncomfortable. I'm sure the Pink Angels looked a lot funnier in the script because the ideas were great but when it was all shot it comes off as a very confused motorcycle movie. Some of the party scenes look like they could have come right out of The Wild Angels or something and then we just get all out wacky scenes with food fights, campaign drinking and lots of fruity frolicking. Worth a watch for anyone who wants to see what is probably the most unconventional biker film ever made but I do warn you, its a very strange one and not necessarily very good either. 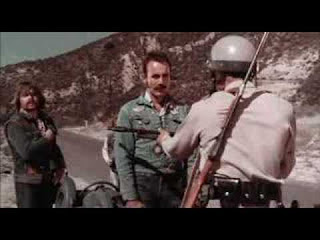