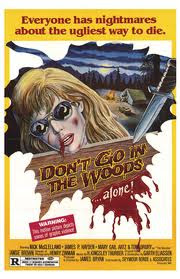 Ever watch a movie and shout at the screen a bunch of questions? That's what happens when you watch Don't Go In The Woods. This early 80's slasher is a prime example of inept film making. There is no real plot and things happen with no explanation. In the earlier part of the film people are being mangled and mutilated but we don't see who is doing it. There is a good amount of gore and splatter but it all happens so fast with cut-shots and bad editing. You kinda just stare at the screen and say "what the hell just happened?".
Eventually we get to see the killer and for some reason he looks like a caveman. He has no back story and none of his actions are ever explained. He carries around a big club that jingles but somehow this never gives away his where-abouts in sneaky stalk and slash scenes. The killer also has a large array of machete's, spears and plastic bags that he puts the bloody bodies of his victims in.
Don't Go In The Woods also has a very strange sense of humor to it and at times its hard to tell which scenes were intentionally funny and which ones were not. There is no way that all of the scenes were supposed to be funny but the bad (very bad) acting puts a layer of camouflage over the film, once again leaving the audience confused. Don't Go In The Woods Alone can be enjoyable with the silly musical score and the blood and guts but only for those who aren't looking for a serious horror flick.
One of my favorite scenes shows a fat guy in a wheel chair ,alone at the top of a rocky mountain. He is decapitated and his head falls through the trees. I know that nothing makes sense in this movie but how did this guy get up a mountain by himself. This would be like Franklin escaping the wrath of leather face in the The Texas Chainsaw Massacre.
Then we get a crazy scene where a woman is slashed up pretty brutally while she is painting a picture and her young child bops up and down in a swing right next to her. The knife goes through the woman and through her canvas right in front of her child's eyes.
There  is also a few dismembered arms and one of which is a pretty gory splatter scene. A girl is speared, A man is strangled and thrown from a cliff and his body hits a bunch of rocks leaving a bloody mess. Another guy gets cut up outside his camper and has his face smashed into the window while his wife stares out at him. The the camper is pushed over a cliff of course goes up in flames with the wife in it. Even the killer himself has a pretty bloody ending.
It's bad and it's bloody. Don't Go In The Woods, stay home and watch a bad movies. 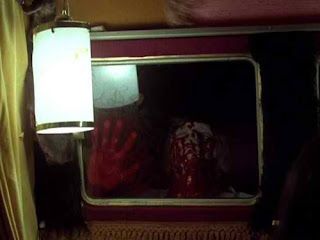