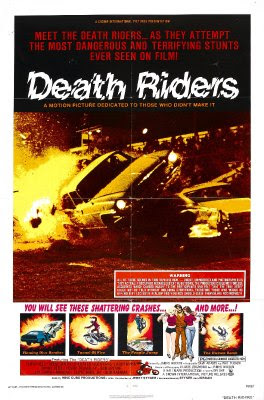 Death Riders is an interesting documentary about a group of young men, ages ranging from 17 to 23 who travel the country and perform death defying acts. These men blow themselves up with dynamite, crash cars at high speeds, jump motorcycles, flip cars and all sorts of other insane stunts involving moving vehicles.
Death Riders opens up with a text stating that this film is real and all of the stunts within the film is real and many people have lost their lives performing these stunts. Then it states "This film is dedicated to all of those who lost their lives performing these stunts".
During the 90 minute or so documentary we do see some accidents and some of the Death Riders are hurt and even hospitalized. However the point of this film is not to watch people being mangled. If that is what you are looking for, not only should you seek help but you should also find another movie. On the other hand Death Riders is a intense look at young men who live their life to the fullest in a time where this sort of thing was acceptable entertainment. Americans just don't go to the town fair and watch maniacs blow themselves up with dynamite anymore. Instead they sit home and watch Jackass, a group of young men who hit each other in the nut-sack. During the hour and a half run time, you really start to feel close to some of these guys and its a big thrill watching them perform some of these acts. I also really liked some of the music in this one. Its pretty much all country but its down right nasty, gritty country. One of the better songs was done by someone who goes by the genius name of Tommy Cash. The song is called Broken Bones and its just as bad-ass as the Death Riders themselves.
The Death Riders also travel around with a clown named Squeak. Squeak helps keep the "Thrill shows" entertaining and moving along at a nice pace. He does the same for the movie with silly acts and some black-face makeup. The camera work is also pretty impressive for a low budget documentary. This ones perfect for anyone who likes dare-devils and car crashes.
Posted by Paul Awful at 2:11 AM