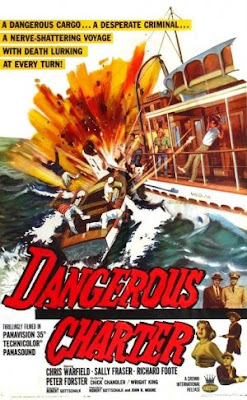 Why do I do this to myself? This one came in a pack of 12 movies which cost me five bucks. The pack had a few titles in it that I wanted such as the gay biker movie The Pink Angels and Sidehackers which was awesome and you can also read about on my blog. The pack is called Savage Cinema and so far it seems to be averaging one bad flick for every good one. Dangerous Charter however is one of the bad ones. Its about a drug smuggler who abandoned his boat "The Medusa" along with the narcotics hidden within it. A group of fishermen find the Medusa and bring it back. The police ask the fishermen to secretly work for them with the idea that the smugglers will come back for their yacht. Things don't go as planned and the fishermen are held captive by the head smuggler and his goons. The acting is awful and the whole movie is boring talky scenes between the hostages and the criminals.
I'm also getting really sick of all these movies that use awful guitar playing and singing as filler. It seems like every movie I watch these days went that rout and it sucks just as much every time. If were not watching these uninteresting characters botch up their lines we are waiting for Dick to put down his guitar and shut up. The characters name is Dick and that's what he is, One big Dick!
Dangerous Charter doesn't get remotely interesting till the last five minutes when we are treated to a shootout between the conflicting characters. One of the goons gets a harpoon through the gut and two others crash their motorboat and drown. Unless you are into movies that take about three sittings to get through, take my advice as a warning and stay as far away from Dangerous Charter as possible.
Posted by Paul Awful at 11:41 PM