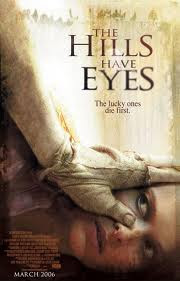 As far as all the horror movie remakes go, I suppose this is probably the only one I enjoyed. It was directed by Alexandre Aja who previous feature was Haut Tension. Haut Tension was far superior to this American remake and pretty much everything else that came out that year. However Aja still managed to put a different spin on the classic 1977 film and send it in a new direction.
The original Hills Have Eyes was about a family of inbred cannibals living up in the hills in a desert and feeding on families who drove by. Wes Cravens version was of course way better but at least Aja tried to make the remake interesting. This time the cannibalistic family were the victims of radiation from the tester bombs dropped by the American military but their deformities turned them into a sort of mutant super strength race. (Silly, I know) At times it is kind of suggested that we should sympathize with the mutants but its a little hard to feel sympathy after we watched them rape an innocent girl, shoot a mother, burn a man alive and steal a baby.
The 2006 remake does have its share of blood and guts and I suppose that is where the movie appealed to me. We get to see a man blow his head off with a shotgun, a dog is gutted, a bird has its head ripped off and the blood is drank from the decapitated body, we get stab wounds, gun wounds and a awesome scene where a guy has a American flag pole shoved through his neck. Scenes like this give the movie a very anti patriotic feel but I suppose the message can be interpreted differently by different viewers. I however felt that the movie doesn't portray America in a very nice light. Before the movie is over we also get a pick axe through a eye, a man has his fingers chopped off, we get to see someone trapped inside a meat locker filled with dismembered limbs in a sort of homage to Texas Chainsaw Massacre, we have mutant singing, baby tossing and a guy is blown up and then hit in the face with a axe.
Aja chose to keep Wes Cravens booby-trap ending but if you remember correctly the 77 version ends pretty abruptly. The remake has a ending that is slightly more gratifying.
If I had it my way, classic films would not be remade but its a cruel world and I have deal with my favorites being ruined over and over again. If you're looking for a remake that doesn't totally suck, this is the one. Its got the gore, the rape, the cannibals, the revenge and it dared to be a bit different. Now if Alexandre Aja goes back to France and doing his own movies we will be in business. 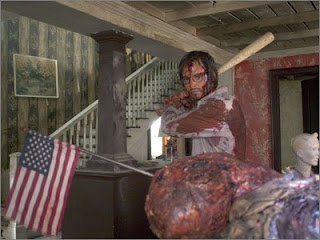 Email ThisBlogThis!Share to TwitterShare to FacebookShare to Pinterest
Labels: Hills Have Eyes (2006)