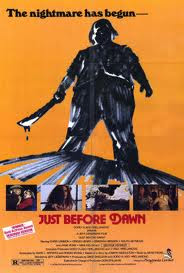 Jeff Lieberman is one of those directors that puts out very entertaining work but its hard to tell if there is any talent there or not. He's better known for his killer worm movie Squirm and the incredibly strange Blue Sunshine about hippies who were given bad acid and turn murderous. Lieberman's films usually have a odd pace to them and they almost feel like some aspect is missing but you just can't pin point what it is. For me its hard to tell weather or not this is intentional or not but the weird pacing and awkward scenes help add to the creepiness of his films.
Just Before Dawn has the same strange feel to it. This early 80's slasher is basically a Texas Chainsaw Massacre ripoff. Five kids venture deep into hillbilly territory for a camping trip up in the wooded mountains. Right from the beginning they reject all warnings (after all it is a slasher flick) from towns folk who speak of killers and demons up in the woods. They even bump into George Kennedy (who played the old man in the Old Chief Wooden Head segment of Creepshow 2) and he delivers a great line "At least tell me where you heading so I will know how to fill out the report when you don't come back.". Well the kids don't listen to Mr. Kennedy either and eventually they start getting knocked off one by one in slasher fashion by a fat, machete wielding hillbilly who squeaks and giggles during the kill scenes.

The killer always seems to be in more then one place at a time and it throws us off as the viewer and adds to the strangeness. Eventually we find out that there is actually two killers and they are inbred brothers who look identical. We also have a strange hillbilly family running around with shotguns and yelling at anyone who comes on their land. We get a few cool slash-em-up scenes and a bit of very unattractive tit. One of the better murder's shows a man having a serrated machete shoved through his crotch and then the killer saws up to his lower back. We also get a machete to the hand, a machete through the gut. One guy is pushed off a cliff and another is shot with a riffle but the most memorable scene is probably the mouth fisting scene. A guy is suffocated with a fist shoved into his mouth and down his throat. It really is a odd moment.
There is no doubt about it. Texas Chainsaw Massacre had a lot of influence on this movie. Everything from the kids driving trough redneck territory in their camper to the demented hillbilly families. Jeff Lieberman yet again makes a weird entertaining horror flick with what can be style or just dumb luck. Either way Just Before Dawn is pure slasher fun and shouldn't disappoint any fans of the genre. So pull your sister close and check out what happens when kin folk keep it in the family for a bit to long with Just Before Dawn. 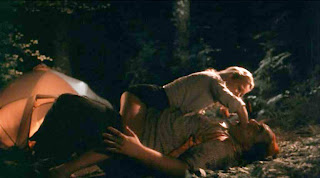