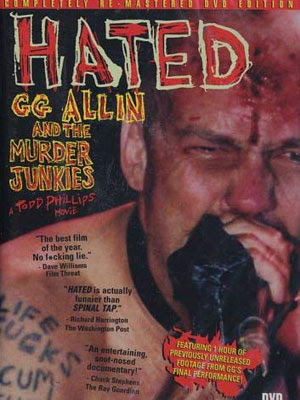 This documentary follows G.G. Allin the all time madman of rock & roll and his band the murder junkies right to G.G.'s death. The movie starts off explaining how G.G. just finished up a three year stretch for assaulting a young girl and he chose to skip parole and go on tour with his band for this documentary. While the band is on tour we have the great privilege of watching G.G. beat himself and his fans to a bloody mess. We also get to see him roll around in his own shit (yes his feces), rub it on his face and eat it. Sometimes he throws it at his audience and others he might masturbate with it. Some call him a maniac, others call him an artist. Whatever your view is on the man, you cant ignore him. We also get to see him drink a prostitutes piss and puke all over himself, get a blow job from a man. We watch him stick a banana up his ass, throw chairs and other foreign objects at his audience and eventually we see him in his casket.
The film states that G.G. Allin a performer with a message to a sick society. I don't think anyone can argue that statement. G.G.  himself states in the film "My message is a message of rebellion. Its the message of the streets. I take the streets and I put it on the stage.". Hated is the best documentary ever made about G.G. Allin and anyone who is a fan of his music/message/mission should have seen it. For those who are not into G.G. the documentary would surely shock them and they will likely either seek out his music or they will be pleased he is dead by the films final. 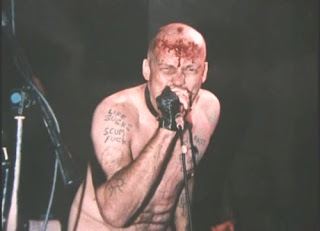