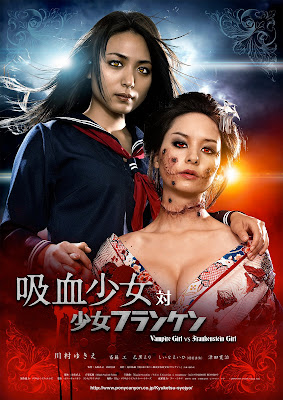 The new trend in Japanese splatter films is their answer to our big budget flashy cgi horror flicks, like the Resident Evil movies and when I look at it that way these movies are slightly more tolerable. Still I am not a big fan of any of these blood soaked computer generated horror flicks.
This one is from the same director who did Tokyo Gore police which I found to be slightly more entertaining then this one. If you're a young gore-hound and you're looking for some way over the top gore I suppose these would be the movies for you. I guess its like what Dead Alive was for my generation. Somehow no matter how ridiculous it sounds, I am able to take Dead Alive a little more seriously and there is nothing serious about that movie at all aside from its practical effects. Vampire Girl VS. Frankenstein Girl on the other hand is 100% all computer graphics and half the time it just looks like a video game.
Don't get me wrong the movie does entertain, especially if the viewer is brain-dead but it plays way to much like a comedy and there is so much silliness going on that the movie tended to be a bit of a nuisance for me.
I enjoyed watching some of the gory fight scenes with heads exploding and any kind of bodily dismemberment you could think of but then the movie goes into this really lame territory of song and dance and it almost seems like a demented musical.
The music on the other hand was probably the highlight for me. The soundtrack was pretty bad-ass and I found myself wanting to sing along which unfortunately would take a lot of practice for me due to the fact that I do not speak Japanese. Another highlight is all the pretty Asian girls running around in school girl outfits and this one super hot babe in a nurses suit who of course has a pretty violent death.
If you're gonna watch this one I'd recommend leaving your brain at home. This one is truly for the mindless. 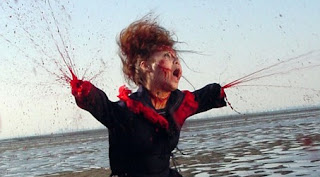