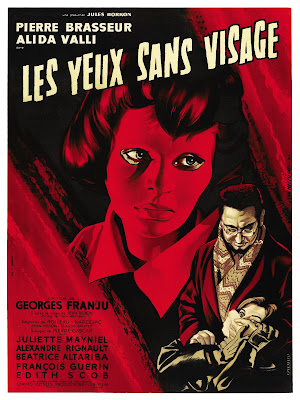 Eyes Without A Face also known as The Horror Chamber of Dr. Faustus comes out of France in 1960 by a director named Georges Franju. At the time Franju was mainly known for his documentaries. His first big hit was a documentary about a slaughter house in France. The film was called Blood Of The Beasts and the shocking footage was something that society just couldn't ignore. This would become a staple pattern in Franju's body of work. A mix between the artsy-fartsy and shocking imagery would make him stand out from the rest.
Eyes Without A Face is the story of a deranged doctor named Genessier or Faustus depending on which version you are watching and his daughter Christiane who lost her face in a car crash. Dr. Genessier blames himself for his daughters disfigured face because he was behind the wheel during the accident. The brilliant yet mad doctor will stop at nothing to repair his daughters damaged face. 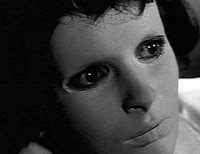 Through most of the movie we never get to see the Christiane's face. It is either hidden from the camera with slick angle's or it is covered with a blank white mask with no facial features. Only the eyes are visible which comes off rather creepy, hence the title. Even with the lack of any facial features Christiane's eyes and body movements say a million words. The audience can feel her pain, her anger and her sorrow. Christiane's scarred face is shown more then once in the film. The first time it is through a blurry lens but the viewer can easily see that her face is not a pretty sight. The next time we see her unmasked is in a series of stills which show that her latest surgery was a failure and her flesh is rotting away.
Her father keeps her locked in the house so he can perform numerous operations on her face. Dr. Genessier is abducting pretty young girls off of the city streets and chloroforming them. Once the girls are knocked out the mad doctor cuts off their face with the help of his female assistant. The real money shot takes place in one of these surgery scenes. First the doctor draws an outline on the victims face and then with a scalpel and various other surgical tools he removes the face. The camera doesn't cut away as the doctor pulls the face off and this makes for a pretty nasty scene, especially for 1960. There is nothing campy (or H.G. Lewis) about the gory images. They come off very realistic and its disturbing even by today's standards.
The other big gore scene involves a man having his face mangled by a pack of viscous dogs. I have a lot of respect for the stunt man who pulled that scene off. Eyes Without A Face also supplies a scalpel through to the throat and a girl who throws herself through a window and comes fatally crashing down on the pavement. Criterion Collection has a very nice DVD print of this. Way better then the old VHS copies that were circulating back in the VCR days. The DVD also has Blood Of The Beasts as a bonus short feature. Worth a watch for anyone who likes a hint of art with their gore. 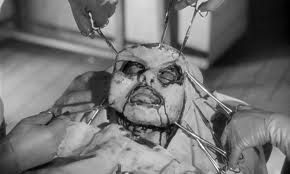 Email ThisBlogThis!Share to TwitterShare to FacebookShare to Pinterest
Labels: Eyes Without A Face