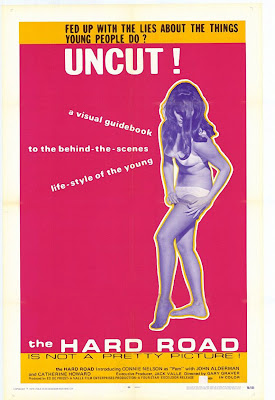 The Hard Road is not a pretty picture! Or at least that's what the tagline says and I think I'm going to have to agree. This anti-drug sexual hygiene scare flick is about a 17 year old girl named Pam and bad choices she makes and The Hard Road she chooses. The film opens up with teenage Pam delivering a baby which unfortunately they didn't show in true exploitation fashion. Pam chooses to put the baby up for adoption and tries to get on with her normal teenage life but the kids in school all know what happened and they are making life very hard for Pam. Pam's parents also feel the pressures of their judgemental surroundings and dad starts drinking heavily while mom pops over the counter pills. Pam gets a job as a secretary for a sleazy man named Leo who runs a music agency. Leo likes to watch Pam through a secret two way mirror in his office but unfortunately the most Pam skin we get is watching her fix her thigh high stalkings. Sorry guys but this ones not a skin flick. Pam meets a rocker who introduces her to some grass and trashy hippie folk. Pam plunges further and further into depravity as she gets turned onto wild orgies, psychedelics, pills and heroin.
As I mentioned this is not a sexploitation flick so we don't get much nudity in the sex scenes. Instead were treated to another disturbing film within the film. Pam catches Gonorrhea and we get a good honest sex hygiene scare film with nasty pictures of rotting genitals and open sores. Its really the typical stuff you see in all these v.d. scare flicks but this one manages to catch us a bit off guard when it pretty much comes from nowhere.
My favorite scenes are probably all the weird hippy-trippy scenes with wide angle lenses and unique camera work. The proper use of lighting and camera angles actually shows a bit of talent on the filmmakers end. As the film goes on we enter darker territory with harder drugs and more violent characters. Pam eventually sees not everyone is a peace loving hippy. There is one hilarious seen where a "o.d." hippy is running through a long tunnel screaming his lungs out. He is then picked up by a friend and the two junkies mug a business man. They kick him in the face with sandals on their feet until the mans face is red with blood and every time they kick him his head rocks back and forth like a bobble-head. This scene has to be seen to be believed. Another very memorable seen is the painful withdrawal from heroin in a prison cell. The junkie smashes his face into a cement wall and goes into convulsions in a pretty realistic scene. The film all comes to a 70's downer ending with Pam having a hell of a acid trip at a airport runway. She is hit by a car and killed. As the tagline says The Hard Road Is Not A Pretty Picture. 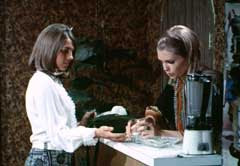