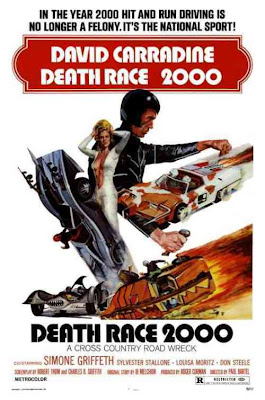 This is probably my favorite car movie of all time. Its nonstop campy fun from beginning to end with a wacky plot that never takes its self to seriously and still manages to deliver. Some films were destined to become timeless cult classics and that's pretty much what we have with this one. I have not seen the remake nor do I want to. Why would anybody want to sit through a politically correct Hollywood version of this? Ill stick to the original Paul Bartel Roger Corman classless classic.
Death Race 2000 is the biggest sport of the future. Its a car race across country but this race has a point system. The drivers get points by hitting pedestrians as they roar through city streets and country side. Each car has two people, the driver and a navigator. The route that the pair chooses is entirely up to them and obviously more populated areas are better for the drivers. Each car has its own bizarre, tacky style. One has big swords protruding from the hood that the driver uses to ram through pedestrians in the street. While another might be covered in swastika's. After all this buzz-bomb is driven by "Herman The German". 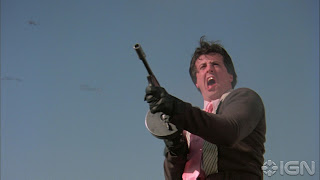 The movie also costars Sylvester Stallone as Machine Gun Joe and for once a Stollone film doesn't completely suck. He plays a over the top violent prick in a old-time mobster get-up with a Brooklyn accent. Machine Gun Joe is hated by most and it seems hes always doing something obnoxious like spitting on his fans or beating his female navigator. He pretty much yells all of his lines and in one of his best scenes he has an argument at a diner table as he spits food all over the place and has mashed potatoes or some mess all over his face. Another reason Machine Gun Joe has a shortage of fans is because he is the rival enemy of the films hero, Frankenstein. Frankenstein is played by David Carradine and the fans love him. "America loves you Frankenstein" is one of the greatest lines in the movie and its very true. They call him Frankenstein because of the amount of car crashes he has been in and all the surgery and reconstruction that he has gone through. "He lost his left arm 76 and his right in 79" They say he lost both eyes, most of his skull and face and hes supposed to be covered with scars but we don't get to see because Frankenstein wears a leather gimp suit. Its awesome to see David Carradine walking around in a leather S&M get-up and just being a all around bad-ass.

Eventually Frankenstein looses his mask and underneath he is just normal, young looking David Carradine. He's supposed to be kind of handsome in this movie and its not long before he is screwing his hot blond navigator and saying things like this "What did you expect, just another pretty face?".
Theres a descent amount of violence in this movie with peoples heads being run over and torsos being crushed. We also get a decapitation and a guy who gets his crotch split in a crash. We also have a subplot going on about some anarchist rebels who want to stop the national Death Race sport and assassinate the president. The subplot helps add for a bit more violence and a few car explosions. Not to mention a airplane crash and burn. There is also a few bare breasted women on display and Mary Woronov is in here as well but unfortunately she doesn't show to much flesh in this one. (gotta watch Sugar Cookies for that) Death Race 2000 has a few more twists and turns within the plot and I'm not going to go into them in here. All I have to say is "Frankenstein for president"! 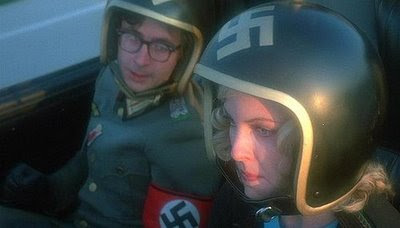 Email ThisBlogThis!Share to TwitterShare to FacebookShare to Pinterest
Labels: Death Race 2000, On The Road