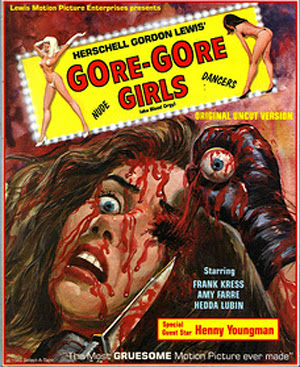 Herschell Gordon Lewis is my favorite director and this is my favorite film he ever did. It was also the last film he would do until about 30 years later when he put out his sequel to his classic Blood Feast.
Gore Gore Girls is extreme as trashy exploitation movies get with its constant spectacles of over the top sex and violence. Any idiot can see that the title of the film is a play on words and the movie shows strippers and Go-Go girls being murdered and mutilated in great detail. The violent gore scenes depicted in the movie go so for over board that by the time the killer is done mangling a face, it looks more like a shag carpet covered in chop meat and red paint.
The most memorable scene follows a girl home after a hard day of stripping to circus stock music and being attacked by crazy feminists with signs that say things like "Quit With Tit!" and "Women Right On!". Well anyway once shes home she takes a cucumber out of the refrigerator and then has her throat slit by the black gloved killer. She falls face down on her kitchen table and the killer pulls her sheer panties down with a fork and smashes in her ass with a meat tenderizer until her ass look like raw chop meat and she eventually dies. We the viewer are not able to tell if she died from her throat being slit or her ass being beaten and smashed into a bloody mess. However the tasteless scene doesn't stop there. The killer then pours salt and pepper on the dead strippers ass wounds. Next her eyes are ripped out of her face with a fork and then squished with the fingers concealed within the black gloves. Fluid spews from the eye balls and the fork is then rammed into the eye socket and left there like a piece of art. The scene ends with a closeup of the cucumber on the kitchen floor covered in blood. 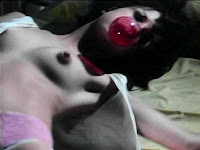 Then we get a scene where a girl is fondling herself in front of a mirror while obnoxiously blowing bubbles with her bubble gum. She is hit in the back of her head with a hammer and her bubble turns bright red as it fills with blood. During the 81 minutes of blood and breasts we also get to see a girl have her face burned to a crisp with a iron. She also has her eyeballs removed from her face. Another girl has her nipples cut off with scissors. The first nipple appears to be shooting milk and the second one looks like its spraying chocolate milk. Only in the warped mind of the great H.G. Lewis could you get this kind of stuff. We also get to see a girl being pushed from a window and cracking her head open on the concrete. Then a truck drives by and runs over the girls head leaving her brains on the street.  Theres also a scene where a girl has her face pushed into a pot of boiling french fries.
Henny Youngman also shows up in this movie and makes a bunch of dumb jokes but I personally find the main character Abraham Gentry to be much more humorous. He is conceded, rude and his acting is just plain bad. We also get a character named Grout, who sits at the end of a bar and paints faces on various fruits and vegetables and then smashes them. Gore Gore Girls is one of those movies that I can watch over and over again and it never gets old. Its funny, its bloody and its just plain filthy. Lovers of trashy, sleazy, gory, exploitation flicks will love it. 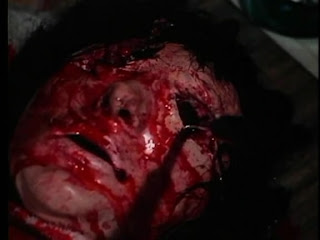