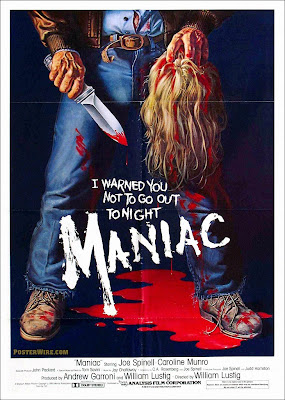 The other night I was lucky enough to catch my all time favorite slasher on the big screen with a brand new print. William Lusting was there as well and hearing him share his thoughts and memories on the film and New York City in general was amazing. Lusting gave one of the best Q&A'a I have ever attended and I have gained even more respect for him in the end. He is a down to earth man who shares many of the same views that I do and he hasn't forgotten his fans.
Maniac has to be one of the most violent Slasher flicks ever made. Just look at the poster and you know you are in for a nasty treat of gore and brutality. William Lusting himself says that when he and Joe (Frank Zito) Spinell decided to do a horror film. They made a pact right from the beginning to make "a true 42nd street picture with no apologies". Id say they kept true to their plan and Maniac deserves the cult fame that it has. Lusting also said that for years the MPAA kept the infamous "Maniac poster in there office's and when new film makers would come in with promotional artwork ideas they would point to the bloody poster and explain that this is a prime example of what is not acceptable.".

Viewing the film in the theater, I was unable to tell if certain scenes looked different because it was a new print or if it was just the fact that it was on the big screen but certain scenes looked a bit different with much more detail. For instance the classic scene where Frank Zito blows off Tom Savini's head in the car had so much detail that I have never seen on my DVD prints. I sat with mouth open as I watched pieces of brains fall from the roof in the cars interior. For anyone out there who worships head-explosions in film the way that I do, they need to see this movie on the big screen. If it comes to a town near you, make sure you do not skip it.
Another thing that I have never noticed before is that we have some true 70's XXX actresses in here. One of which is Sharon Mitchell from Lusting's previous adult feature The Violation Of Claudia which some how I have not seen yet but its one of those movies that I know I will get around to eventually and it will probably have a spot in my hardcore collection in the near future. Sharon Mitchell has so many credits to her name, many of which are nasty little films (Water Power and Taming Of Rebbecca) that could only have been made in the sick 70's.

William Lusting also explained that the motivation for Maniac, aside for his love for horror movies it was more just the times in general. He said that with Maniac he was doing nothing more than captivating the times. The late 70's was a time where we had some of the most prolific serial killers. Although he mainly molded the character of Frank Zito from The Son Of Sam, he found inspiration from these real life monsters who were impossible to avoid. The papers were filled with the real life horrors of true maniacs and the awful crimes that they commit. Lusting says he found inspiration in Gacy, Gein (of course) and even Bundy which I don't see much in the film but I wasn't about to argue with the man. Lusting also explained his love for NYC even the dark side of it. He said that he and Spinell usually would stroll down 42nd street and just watch the madness going on around them. One of my favorite things he said was "New York City used to have a lot of character and they took it all away. Every city needs a red light district and that was 42nd street. Now when I pass by I just want to vomit." Basically Lustings environment created Maniac and it was art imitating life and so on. Apparently this one is on its way to being remade and Mr. Lusting has nothing to do with it. First they destroyed the city that I was to young to even know. Now they just destroy the films that found their inspiration in that time and place. 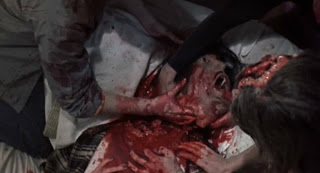