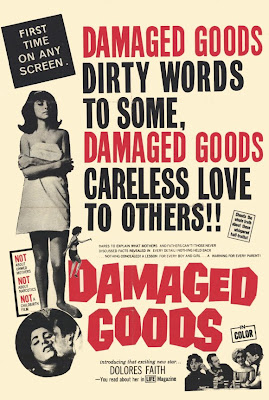 Damaged Goods follows the typical exploitation sex hygiene format from beginning to end. This one is about a innocent teenage couple named Jim and Judy who plan to get married after high school. Their plans come to a halt when Judy finds out that Jim and his car club "The Torches" took a little road trip where they picked up some prostitutes. Jim picks up a little more then a prostitute. That's right clean cut Jim caught V.D., Syphilis to be exact.
Damaged Goods is pretty boring up until the boys pick up the hookers. Then we are treated to another sex hygiene flick within the flick that is really relatively tame compared to other flicks in this genre like Mom And Dad. The most disturbing scene in this one is probably a close up of a baby girl who is infected with Syphilis. We also get a bow legged cripple and some nasty looking sores. Other then that Damaged Goods offers a cheesy burlesque scene, some big 60's underwear and some really uptight parents. Surf rock fans will be happy to know that The Ventures music fills all the driving scenes. Its to bad its the same song over and over again.
Doesn't offer up anything all that new or memorable but fans of this type of film won't be let down. After all they are always pretty similar.
Posted by Paul Awful at 12:17 AM