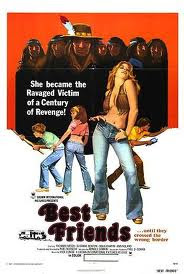 Another bad one from Crown International. This one is about two best friends Jesse & Pat. They both plan a road trip with their soon to be brides and they are like one big sappy family. Actually the first half of this movie is so incredibly sappy that its a bit painful to sit through. We usually end up watching Jesse and Pat rolling around on the floor together with no shirts on and giggling like school girls. Its a bit homoerotic at times. Anyway, its not long before Pat's true colors start to show. He is jealous, manipulative and pretty crazy all around. Pat decides he is not going to marry his girl and he makes up his mind that Jesse is not going to marry his... Pat will not let anything step between him and his best friends good times even if it means someone has to die.
Best Friends takes a positive turn once we see how nutty Pat really is and the movie had potential to be alright but it holds back and overall disappoints. Best Friends has its share of flesh but the bare breasted girls on display aren't much to be desired. We also get an attempted rape, some fist fights and really shitty go-go dancing. Best Friends was so close to becoming a revenge flick. You can feel the nastiness that wants to come through but instead it chooses to stay tame and lame. 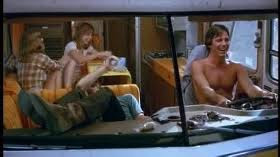 Email ThisBlogThis!Share to TwitterShare to FacebookShare to Pinterest
Labels: Best Friends, On The Road