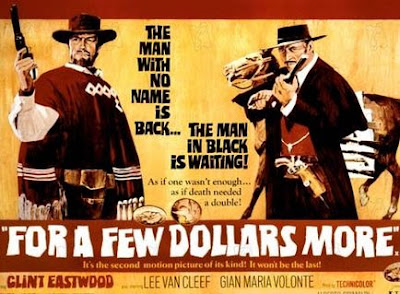 This is Sergio Leone's follow up to A Fist Full Of Dollars and a very good one at that. For me this is the weakest in the trilogy but only because I feel it gets a bit slow at times. It still has that Leone style that revolutionized westerns forever.
Clint Eastwood is back as the man with no name and this time he crosses paths with Lee Van Cleef. Eastwood and Cleef both play bounty hunters and they are both after the same man. The man they are hunting is a vicious criminal named Indio and there is a 10,000 dollar reward on his head. Eastwood and Cleef butt heads at first and they have one of all my all time favorite duels in any western. Its a hat shooting duel where they shoot the hell out of each others hats and send them flying through the desert air. I know this doesn't sound like a very entertaining scene but when Sergio Leone is director and you have Ennio Morricone's music playing over it, it really makes for a great piece of cinema. Once the two bounty hunters hats are full of holes and they both realize how dangerous the other is they choose to team up and take on Indio and his gang together.
We get a fair amount of shoot-em-up gun violence in this one but I personally feel the shoot outs in the first flick are slightly more entertaining. Klaus Kinski also appears in this one as a hunchback in Idio's gang of bandits. The final showdown is an excellent set-piece and will later be mastered in the third film in the trilogy The Good, The Bad And The Ugly. Unfortunately nobody laughs at Clint Eastwood's mule in this one but its still an amazing flick from the king of spaghetti westerns. 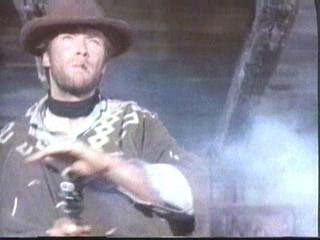