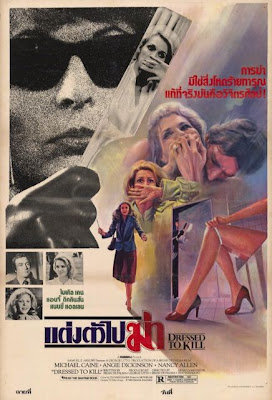 Dressed To Kill is pretty much an Americanized Gialo and fans of Italian horror will easily see where Brian De Palma got his influence from. Dario Argento and Mario Bava mainly come to mind while watching this one but most of Argento's more graphic stuff hadn't come out yet. Dressed To Kill was released 1980 and Argento's Tenebre wouldn't come out for another two years which makes sense because De Palma didn't go for a gore flick. Instead he went for truly scary movie with very stylish camera work. Deep Red and The Bird With The Crystal Plumage were probably the two main influences for this mystery/slasher flick. Looking back now, I wonder if Argento borrowed from De Palma for Tenebre in the scene where the camera moves up the building and in and out of rooms and windows with very little cuts. If you watch the cinematography in the art museum in Dresses To Kill the camera work is similar.
Dressed To Kill is about a transvestite with some deep emotional problems who is slashing up the women that excite he/she sexually. A prostitute who witnessed the first murder teams up with the victims teenage son to track down the killer. There is a few twists in the plot but in the end when everything comes together it really makes for a genius film.
The fact that Brian De Palma chose to make a film in a genre that is mainly only done in Italy instead of doing a American style slasher really shows that the man is an artist and has enough confidence in himself to know the audience will still be pleased. I'm just glad Argento didn't decide to do a hockey masked serial killer movie. Dressed To Kill has one graphic murder scene in a elevator. The black gloved, wig wearing tranny slashes into Angie Dickenson (Big Bad Momma). First a nasty gash through her palm as she tries to defend herself and I believe that Lucio Fulci might have found inspiration in this scene for his 1982 Gialo, New York Ripper. The tranny killer then straight razors into Dickensons throat and leaves the bloodied corpse in the elevator. Angie Dickenson also shows quite a bit of flesh in this one and there is a pretty nice masturbation scene with her in a shower.

Most Horror fans would remember Nancy Allen as the girl who gives John Travolta a blowjob in Carrie. Well she plays the hooker Dressed To Kill and she shows a bit of tit too. Aside from walking around in sexy lingerie, Nancy Allen does do a good job. Allen add's tension to the cat and mouse chase scenes. One in particular takes place on a subway train and there is a group of black men chasing her from car to car. Nancy believes the killer is on the other end of the train and has no where to go. More often then not Dressed To Kill uses jump scares and although they are very affective in this movie particularly, it would have been nice to get a bit more gore. Aside from the nudity and the nasty razor scene in the elevator, Dressed To Kill offers a pretty cool strangulation scene. A bullet wound, lots of cross dressing, including a nurses outfit. We get a car chase scene and some graphic talk about sex changes.
The main thing I liked about Dressed To Kill is that it can appeal to mainstream movie goers and still please the more jaded cult film fanatics at the same time. Although De Palma went for a Italian style murder mystery, it is still a horror flick and not a thriller. 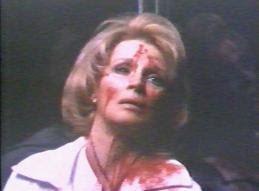