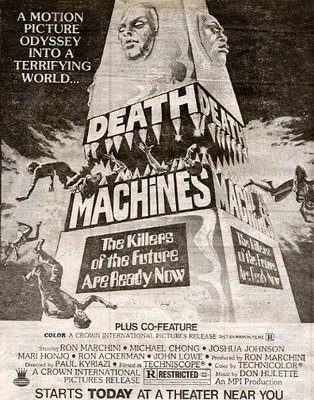 What we have here is a no frills, martial arts B-movie blast chock full of bad acting, bad Kung Fu and even worse dialogue. Its not that the dialogue itself is awful, its more of the fact that the actors just can't speak English. Good luck trying to understand anything that the main female villain is saying... She mumbles her lines through a very thick accent and it almost becomes laughable as you try your hardest to figure out what she is saying. Where she lacks in her verbal skills she makes up for it with hair-insanity. You have to see this hair to believe it.

With first viewing most would probably not like this one but Death Machines grows on you with time. Once you get past the technical problems, you realize that Death Machines is jam packed with ridiculous fight scenes, dismembered limbs and some really goofy characters. My personal favorite of all the goofy characters is a fat, balding biker who picks a fight with the Death Machines. We are also treated to the total destruction of a titty-bar in what might be the films most absurd fight scene. Between the crazy hair, explosions & chop-socky insanity, Death Machines makes for a good mindless time waster.