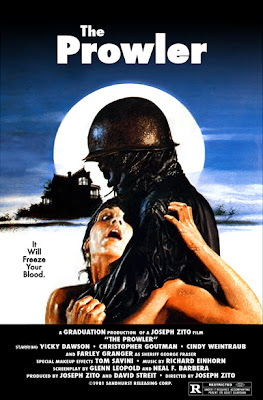 This here is one of my all time favorite slasher films. I always relate it to Maniac (1980) which I can watch over and over. This one came out one year after Maniac and Tom Savini's special effects might even be slightly better in this one. The murder scenes are exceptionally gory in this one and it even has a shotgun head explosion that is just as good as the one in Maniac. We are also treated to a couple of nasty throat slashing scenes and one in particular really sticks in the mind. A girl has her throat slit in a swimming pool and the Prowler holds her under water as she loses her last bit of breath. The blood spews out into the pool with air bubbles and the water slowly turns red. For me the nastiest murder scene shows a man having a army knife smashed through the top of his skull and it comes out his neck below the chin. The camera holds the shot and the victims eyes roll into the back of his skull as blood leaks from his two knife wounds. Although the special effects and makeup are excellent The Prowler lacks in the writing department. It can get pretty slow at times with what seems like padding. The padding in this one is pretty uninteresting. Its basically just characters walking around aimlessly looking scared. The direction and cinematography on the other hand is pretty nice and the film has a very unique look to it. It was definitely shot on 35mm but the film itself almost has a fog or a mist look to it. It kind of reminds me of what would look like a dream sequence in another film. The Prowler was directed by Joesph Zito, not to be confused for Frank Zito who is of course the scalp collecting psycho in Maniac played by Joe Spinell. Well the relations to Maniac really do go on and on with this movie. Director Joe Zito may be most famous for Friday The 13th : The Final Chapter but in my opinion The Prowler is his best film.
A lot of people relate this film to My Bloody Valentine (1981) because of similarities in the plot but then again most slasher films have countless similarities. The Prowler is a must see for anyone who likes slasher flicks and Gorehounds will be in all their gory glory.