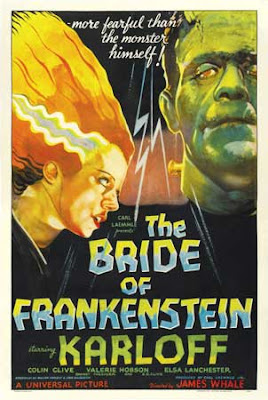 Its very rare when a sequel comes even close to the original but Bride Of Frankenstein is slightly better then the first Frankenstein movie or at least as far as the production value goes. It opens up with a singer, a poet and a writer sitting around a fireplace while a lightning storm rages outside. The writer is no other then Mary Shelly or at least the character is supposed to be Mary Shelly and the three artists are discussing her story, Frankenstein. In other words they are telling the audience that the original movie was just a story and the writer is sitting in front of us. We then get some flashbacks and a quick recap of the original film and the mayhem that the Monster unleashed on the village. We see the original ending with the Monster throwing Dr. Frankenstein from the old wind mill tower and then going down in flames with the crumbling mill. Next we cut back to Marry Shelly and she assures us that the story doesn't end there. Now normally this could outrage an audience. Its almost like a cop-out but once Mary starts telling her continuation of the story the viewer almost immediately forgets that we are hearing a story. It continues right from the end credits of the first film. The Monster falls into a sort of water well and Dr. Frankenstein is rushed home. The Monster continues its murderous rampage and the first victims in the sequel are the parents of the little girl that the Monster drowns in the lake. First the Monster drowns the father and then he throws the mother into the water well and she lay mangled on the rocks.
The Monster then takes to the woods and finds refuge in a old blind mans house. The Monster is still played by Boris Karloff and his performance is even better this time because the roll allows for it. The blind man and the Monster become friends and the Frankensteins Monster learns to talk. Its not long before some hunters find the Monster in the blind mans home and a typical torch wielding mob brings the Monster in.

The Monster is chained up in an old dungeon but its not long before he breaks free of his chains and is yet again on the lose. All the while we have another mad scientist named Doctor Pretorious who is trying to convince Dr. Frankenstein to take on a partnership with him. The Monster and Pretorious meet in a old crypt and the two hit it off pretty well. Karloff gives the great lines "Frankenstein made me from the dead. I love the dead, Hate the living". Dr. Pretorious soon realizes what must be done. The Monster needs a mate and Dr. Frankenstein needs to create it. It will be the Bride Of Frankenstein.
Dr. Pretorious uses the Monster to kidnap Dr. Frankensteins wife and hold her ransom until the bride is created.
The Bride Of Frankenstein is more morbid then the original with more murders and lots of depressing talk of the dead. "What we need is a female victim of sudden death" Young girls are being killed for the fresh body parts needed to create the Bride. We have rocks crushing men, people drinking and talking with corpses. When we finally get to the scene where Dr. Frankenstein is going to bring life to the Bride we have some awesome effects for the time. James Whale does a good job improving but yet keeping the same atmosphere of the original. Lightning strikes the corpse and sparks fly everywhere. Dr. Frankenstein played by Colin Clive reenacts his famous "Its alive!" scene then we have the tragic ending. Everyone and their half retarded sister knows how this one ends so there is no need to go into all of that but lets just say the Monster chooses suicide and takes the ones he loves with him. "We belong dead!"
Its amazing to me that they were making better monster movies in the 30's then they are today. The stories of these old movies were incredible and there is just so much more feeling to the film all together. The camera work is excellent in the Bride and the special effects were great too. Today we have so much cgi we can't even tell what we are looking at and the camera shakes all over the place making causing a headache before the films over. Bride Of Frankenstein is a true classic and a true classic never goes out of style. 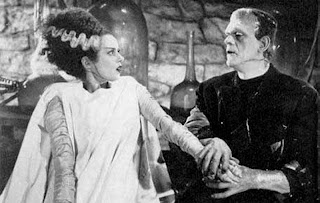