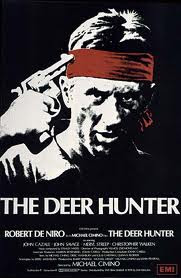 The Deer Hunter is one of the best Vietnam movies ever made, in the same class as Apocalypse Now and Full Metal Jacket. There is nothing glamorous about this one. It shows war for what it is and the affect it has on the men who fight and the families and friends back home. Actually The Deer Hunter shows very little war. Its a very long film it clocks in at 182 min. and the first 4o min or so is before the two main characters (Robert De Niro & Christopher Walken) even leave for Nam. Instead we have a huge wedding party and a hunting trip but in these scenes you can sense that these two characters aside from their front have some deep emotions going on inside. They might be surrounded by friends and family but these men are not happy.
When we finally get to the war stuff The Deer Hunter leaves us with one of the most powerful and memorable scenes in any war movie. Robert De Niro and Christopher Walken (who are best friends) are held at gun point in a shack on a Vietnam river and are forced to play Russian roulette. They already witnessed their friends play and one by one they are dying. One guy slightly misses and hits his skull on a angel. He thrown into a rat infested pit and left to bleed to death with a shattered skull. De Niro and Walken are the last two to play. These two actors are incredible in this scene. It seems to go on and on as they take turns putting the gun to their head and pulling the trigger. You have no choice but to let out a sigh of reliefe with them when we here the gun click to an empty chamber. De Niro explains to Walken that the only way they are going to get out of this alive is to play with more bullets. They need at least three in the gun and then they have a chance of killing the scum who is making them play this horrible game. Well they end up getting away and they are separated in Vietnam but the two made a pact that they would not leave each other behind. Walken ends up losing his mind and De Niro tries to bring him home. Lets just say theres some more Russian roulette and only one of them survives.
This one isn't the easiest of movies to watch but it is done so well that it will never be forgotten.