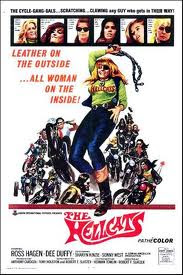 For some reason or other The Hellcats was marketed as a female biker gang flick. The alternate title was Biker Babes and the tagline states Leather On The Outside... All Woman On The Inside! Well I guess that's why we call them exploitation flicks because The Hellcats is not a woman's biker gang. If that's what you're looking for you're better off with something like Angels Wild Women with Ross Hagen. What do you know Ross Hagen is also the star of this film. I have really taken a liking to Mr. Hagen as I am a big fan of him in Sidehackers. I know I am probably the only fan of Sidehackers in the world but my answer to that is, well the rest of the world is crazy because Sidehackers is awesome!
This time Hagen plays a soldier named Monte and his brother is a narcotics agent who was just murdered. Monte and his sister inlaw discover that a biker gang named The Hellcats probably had some involvement in the murder. The two disguised themselves as bikers and join up with The Hellcats. Eventually they learn that it wasn't exactly the bikers who did the killing but some mobsters with a score to settle.
This one is pretty rough around the edges. Its filled with plotholes, bad acting and some really bad music but the film still manages to stay entertaining. One thing this one had going for it is the fact that the gang is very big. Most of the time when you watch these cheesy biker exploitation flicks the gang consists of three guys and it comes off rather embarrassing. The Hellcats may be a big gang but they are a very odd one at that. Some of the members look like legit biker folk while some look like hippies. These guys and gals are pretty rough and tough. They drink like fish, they drop acid and they pretty much party through the whole movie. If they are not partying they are probably fighting rival gangs or challenging each other to weird duels. For me some of the best scenes where party scenes with beer foam flying all over the place and crazy Go-Go dancing babes with eye patches. We also get a chain fight and a very strange game where the loser is dragged by his feet through dirt roads by a motorcycle. The Hellcats isn't exactly a good movie but you could do much worse in this genre, Hells Bloody Devils for example... What ever you do stay away from that one! I still recommend Ross Hagens rape/revenge biker film Sidehackers. If not I suppose this one is worth a watch. 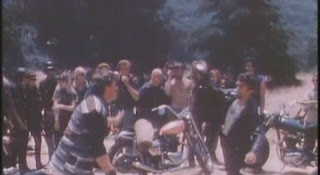