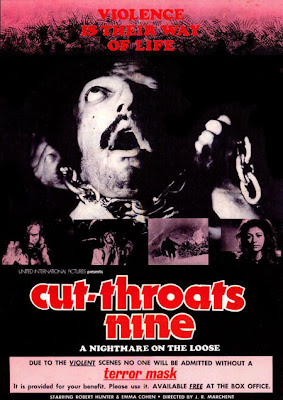 Cut-Throats Nine is my personal all time favorite western. It is often referred to as a spaghetti western which really isn't accurate because its not Italian. Cut-Throats Nine came out of Spain and it doesn't even look like a western. First off almost the whole movie takes place in the snow, up in the mountains. This just adds to the bleakness to one of the nastiest, violent, nihilistic westerns ever made.
The Cut-Throats Nine is a group of criminals on a chain gang who are being transported to a new prison by a man named Sargent Brown and his daughter Sarah. Sgt. Brown loses his horses and the carriage when a group of bandits attempt to rob him. Now Sgt. Brown along with his daughter are trapped in the middle of nowhere with minimal food and water and a group of murderers and rapists all chained together by the feet. The only thing keeping the Sgt. and his daughter safe from the blood thirsty chain gang is his pistol.
Its not long before the Cut-Throats find out that the chain that binds them together is made of gold. From here on the movie gets more violent and nihilistic. These men are Cut-Throats in every sense of the word. There is no morals here, no remorse and its everyman for himself. If one member of the chain gang breaks his leg the others will happily kill him. There is one scene in the movie where a member of the chain gang is strangled and when none of the Cut-Throats will confess to Sgt. Brown the Sgt. forces the gang to take turns carrying the corpse. While the Sgt. Sleeps the Cut-Throats throw the corpse in the fire and the body is severely charred and burned up. Its a pretty gross scene but the point isn't the gore. The point is the how savage these men are. They burned the corpse so the Sgt. would have no choice but to chop the leg off of the stinking, burned up rotten corpse. True Cut-Throats only care for themselves and this movie shows that in great detail.
Cut-Throats Nine is one of those movies that manages to stay miserable all the way through. There is no happy ending here and you never really expect one either. Every character appears to be doomed in their own way and the ending proves that they are. We have gory gun shots to the face with blood spurting from an eyeball , a machete to the leg, we have the charred corpse BBQ, intestines spill out with a knife to the guts, there are hangings, a rape scene, explosions, horses falling down snowy mountains, strangulation's, a woman has her brains blown out with a shot to the head. The violence seems to go on and on in this one.
Cut-Throats Nine is actually the movie that made me realize I liked westerns. It wasn't Django or The Good The Bad And The Ugly. This one opened me up for a whole genre that I thought was relatively boring. This one is more for the horror fanatic. Check it out! 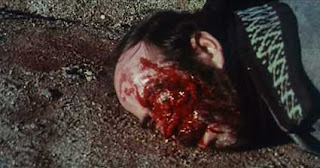