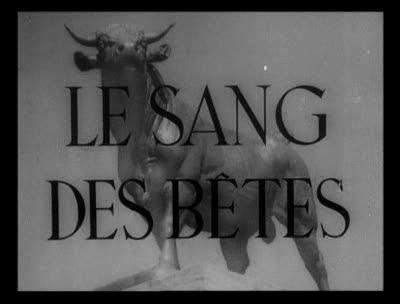 Animal lovers might want to skip this one because its a pretty nasty flick. Blood Of The Beasts is a 20 minute documentary about a slaughter house in France from director Georges Franju who would later go on to do the great Eyes Without A Face. This is a odd one because it is a down right shocking look at animals being slaughtered and mangled and it is all shown in great detail. The camera holds nothing back as the narrator speaks over the ghastly footage. However aside from being a shocking gross out flick there is a sense of art to it. It's almost like a early Mondo flick in the sense that the narration is suggestive in a sort of sarcastic way.
Durring the 2o min. of hell we have a horse who gets a sort of pick axe to the head and then is drained of its blood and skinned alive. The horse is then sawed in half by a man who looks like he might be a serial killer. We then have some cows being ripped apart and a bunch of sheep are decapitated with one hell of a sharp knife. The butchers cut the heads off and throw them across the room and the heads land in a big pile. Blood Of The Beasts has thick steam that comes from the blood soaked ground. It must have been cold during the filming and the steam is from the rivers of blood that these men work in all day. I am not exaggerating either, These men stand ankle deep in blood.
This early shockumentary almost smells of death and it isn't the easiest of sit through but its a great little flick to gross your friends out with., especially if there are any vegetarians in the room.
"I strike you without hate because man needs to eat every day." 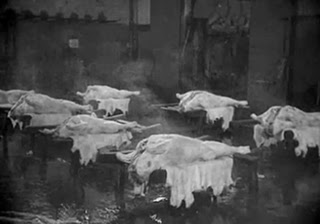 Email ThisBlogThis!Share to TwitterShare to FacebookShare to Pinterest
Labels: Blood Of The Beasts, Documentary, Mondo Films