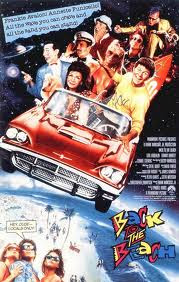 If you like the old Frankie & Annette beach flicks like Beach Blanket Bingo or Bikini Beach you might enjoy this 80's recap as one last look at your favorite beach guy and doll. I however couldn't stand it and felt I was being tortured throughout.
Frankie and Annette are retired and have a teenage son named Bobby. Frankie is a car salesman, Annette is a house wife and their son is a rebel adolescent punk rocker with a bad attitude. Bobby is probably the most entertaining aspect of the film, with his cheesy lines and his general discontent with his parents. The family decides to take a vacation to California and get Back To The Beach. The beach is filled with young punks, blond bimbos, muscle men and cheesy new wave kids. Frankie takes on the leader of a surf gang in a surf duel for control of the beach.
Back To The Beach also stars Lori Loughlin who most would remember from the terribly annoying t.v. show Full House. Well at least we don't have to deal with uncle Jessie in this movie. This stupid 80's beach party homage flick is filled with all kinds of absurdities from pajama parties with a old washed up Annette, who some how still manages to be attractive, to a lame ska band who performs a painful song called "The Jamaican Ska". Dick Dale & His Del-Tones shows up and performs a really bad 80's version of California Son and then there is some purposely funny, but kind of embarassing Frankie "The Big Kahuna" surf scenes.
The Highlight of this movie was probably watching Mr. Pee Wee Herman perform the classic Trashmen song Surfing Bird. Skip the movie and watch Pee Wee get down with some surf rock. 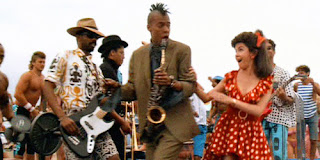 Email ThisBlogThis!Share to TwitterShare to FacebookShare to Pinterest
Labels: Back To The Beach, Beach Party Flicks