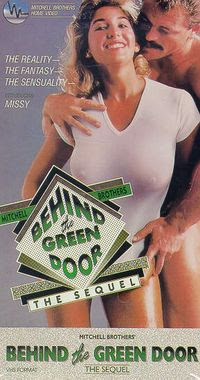 The Mitchell Brothers release their sequel to the classic Behind The Green Door 14 years after its release. Its also the last film the Mitchell Brothers would do. Its easy to understand why The Sequel doesn't really appeal to many people but I am some what of a fan.
It opens and ends with a weird, almost disturbing looking puppet explaining what we are about to see. In the beginning we are on a plane with some very strange characters. It is all shot P.O.V. style from what is supposed to be Missy Manners character Gloria's perspective. The dubbing is so bad it makes a 70's Hong Kong kung fu flick seem like Shakespeare. The plane has a crash landing for no apparent reason other then maybe for cinematic value and entertainment. Everyone on the plane is fine and we follow Gloria home where we will eventually see her face. Gloria puts on a VHS copy of the original Behind The Green Door at the same time as her neighbor and we get a quick masturbation scene from both parties.
Its not long before we enter the strange familiar swingers world from the original film and some of the scenes are almost reenacted. However this time there will not be a long artsy cum shot sequence because Behind The Green Door : The Sequel almost plays as a public service announcement. The aids epidemic of the time is brought up over and over again and everyone is wearing condoms, latex gloves and using dental dams. What we do get is another swinging trapeze bar sex orgy. A 400 Lb. woman being manhandled. A Transsexual that is way more disturbing then the one in the original. We get a man with the lower body of a horse, Statues who come to life for a swinging good time. They even reenact the dive into the vagina scene.
All in all The Sequel can't even be compared to the originality of the first Green Door but it still manages to be weird and artsy enough to keep my attention. The Sequel is worth owning in my opinion, it just lacks the freshness of the 72 classic.
Check out Behind The Green Door : The Sequel. You can wear a condom and sterilize your body but remember, you're still filthy in your mind.
Posted by Paul Awful at 12:49 PM