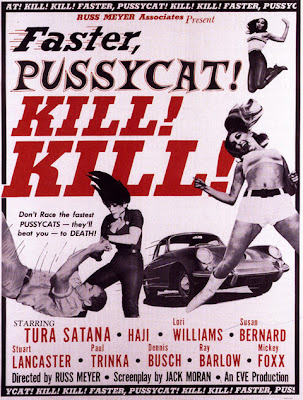 Off the wall craziness with hot go-go babes in tight skimpy outfits, fast cars and violence from the great Russ Meyer. Faster, Pussycat! Kill! Kill! is probably the most entertaining of all Meyer films and its definitely the one hes remembered for.
Three beautiful big breasted Go-Go dancers take their cars through the desert where they meet a all American couple, in other words "Squares!" If there is anything these girls can't stand its squares. The girls challenge the couple to a race and the gratification of winning isn't enough for the leader of the threesome girl gang played by Tura Satana. She swipes a stop watch from the couple and tells them to split. When the couple refuse Tura gives "Lover-Boy" the beating of his life and breaks his spine with some hilarious Kung Fu. The three babes tie up the now single bikini clad girl, force feed her some sedatives and continue to travel across desert as they make up their minds what to do with their little witness. The audience is treated to a nonstop sexual teas-o-ramma as the camera drops in on very revealing angels of bra busting boobs and hot-pants shots. The deadly trio of femme fatales form a plan to steal the riches from a hillbilly family in the desert who is supposedly "loaded". The girls get a  little more then they bargain for when they learn that this family has some sort of sick perverse form of vengeance that they are taking out on pretty young girls. Old grandpa is in a wheel chair due to a bad accident involving a pretty young girl and a train. The old man has a big "stud" of a son who spends all of his time working out and fondling pretty babes the only problem is that he plays a little to rough. The family and the girls have a big bloody fight and the ending is as incredible as the beginning.
This one has something for everyone. Sexy babes, race cars, really bad Kung Fu, Go-Go dancing, pervert rednecks and really silly dialogue. Anybody who likes trashy exploitation movies would get a total kick out of this movie and its a little hard to even place a genre to this movie. Its almost a cross between a roughie and a on the road flick. It can't really be considered a sexploitation flick because there is no nudity on display. Despite the lack of flesh, Faster, Pussycat! Kill! Kill! is the ultimate in tease exploitation flicks. 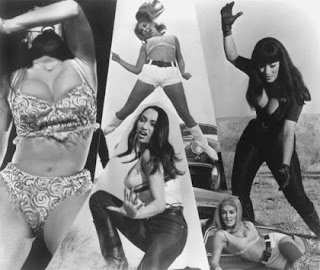