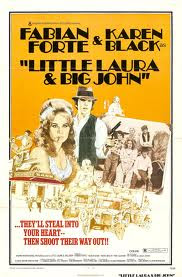 What we have here is a low budget ripoff of Bonnie And Clyde. Instead of the Barrow Gang this one follows the life, crimes and death of the John Ashly Gang, not to be mistaken for John Ashly from all those Philippines Beast Of Blood movies. Nope, this John Ashly is played by a actor named Fabian Forte and hes not even worth talking about. The real star here is Karen Black and she doesn't do a very good job either. Karen plays Little Laura, John Ashly's girlfriend and she helps take part in the bank robberies and some of the gangs other exploits. Unlike Bonnie And Clyde the female character is the one to blame for all the misfortune that will come. Big John Ashly finds himself in a whole world of trouble from the beginning because he tries to please Little Laura.
This film really let me down because it had one of the coolest opening scenes I have seen in a long time. It opens up in New York with mobsters being mowed down in the streets with Tommy Guns. It almost started off like a trailer with fast paced action shoot outs and cars flipping over all with a voice over narration. The film goes down hill from here on. Most of the film takes place in Florida and its kind of hard to get into a mobster flick with palm trees and white beaches all over the place. I was also let down because I am a huge fan of Bonnie And Clyde (1967) with Fay Dunaway and Warren Beatty. This one rips it off in every way possible and still manages to be awful right down to the infamous nihilistic shootout ending. Another thing that really bothered me about this one is the soundtrack. The music was so discombobulated, it made no sense at all. First we would be listening to a old time 20's ragtime piece and then it would go to 70's funk-a-dellic fuzz guitar that sounded like it should be out of a Blaxploitation flick. Then for the car chase scenes we had some Blue Grass that sounded like it was lifted right out of Bonnie And Clyde and the next sequence would have some awful song that sounds like a Carpenters track. Aside from the crap soundtrack the audio was all off on the print that I have. Everything sounds muffled and oddly enough it helped make the action scenes even worse. Don't waste your time on this one. Stick to Bonnie And Clyde!
Posted by Paul Awful at 1:04 AM