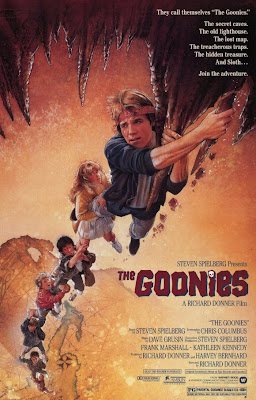 Everybody has a childhood favorite, a movie that sort of defines their youth. A movie that no matter how many years go by, you still remember all the lines. For me that movie is The Goonies. This movie played repeatedly on my VCR when I was a kid and I'm sure that to this day even my parents would remember every line due to the amount of play it got. Most of the movies that I watched a lot as a kid I wouldn't want to sit through today but The Goonies is the one that holds up for me and I believe it has the same affect on most kids who were growing up in the 80's. 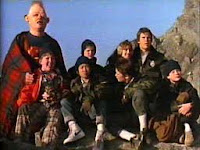 Looking at the film now it sends me back in time to when I was a young kid sitting around with my best friends and chuckling at "the truffle shuffle" or Sloth and his wiggling ears. I think I laugh even harder as an adult then when I was a young preteen.
Its also hard to believe that this is what was considered a kids movie back in the 80's before everything was politically correct. The kids say the word "shit" constantly in the movie and they also talk about sex dungeons, drugs and they make jokes about sex. These lines would never be in a movie for kids today. Aside from some of the crude talk out of the mouths of young boys there is also a lot of death in the movie. The movie opens with what is supposed to be a suicide and then theres corpses with bullet holes in their heads. Not to mention the film is filled with skeletons and I could see this movie even scaring a young kid today. I guess the times were different and I watched as they changed gradually and didn't notice the regression of quality in films. It makes sense that there are a lot of scary scenes because The Goonies is from the same director that did The Omen (1976). He also did a bunch of other big hits from my youth like Superman but I couldn't care about those movies today. The Goonies stands out and doesn't even feel dated aside from the gratuitous Cindy Lauper and some cheesy 80's lines like "Jerk alert". In one scene the older brother says "I'm gonna hit you so hard that when you wake up your clothes will be out of style". That's pretty 80's too.
Still The Goonies is the ultimate adventure as far as a kids movie goes and I feel bad that the younger generation has nothing better then Sponge Bob to watch today. It doesn't matter how old I get, I'm still gonna grab my best deformed , retarded friend in a Superman shirt and sit back and enjoy The Goonies. 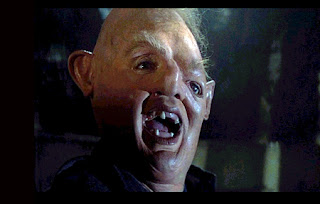 Email ThisBlogThis!Share to TwitterShare to FacebookShare to Pinterest
Labels: Goonies