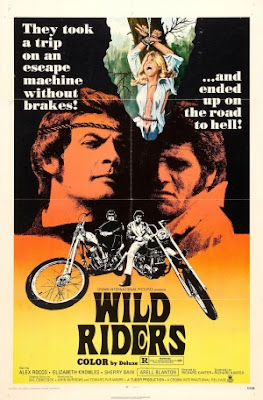 Wild Riders also known as Angels For Kicks (I think I like the later title better), crosses two genres. Its a rape/revenge, biker exploitation flick about two losers named Pete and Stick who are kicked out of a motorcycle gang for raping and killing a young girl. The gang tells the sadistic duo that the gang is heading in one direction and that they should head in the other. Well Pete and Stick do go their own way and its a pretty nasty road they chose. The two bikers plot out a home invasion on two girls. Pete is the brains of the pair and stick is pretty much animalistic moron. First the bikers play nice. Pete gets it on with the nympho home owner, who's husband is out of town while Stick goes pretty much ape-shit when he sees a frog statue. 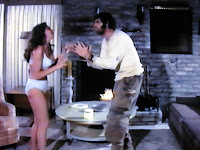 The frog sends Stick into a fit of rage and he takes the less willing woman by force and the whole time he screaming and ranting about how he doesn't look like a frog. After Stick rapes the girl he assures her that he is a good guy and he says "we both have a lot in common because we both have parents and I would really like to meet yours". The he tells the beaten and raped woman that she can take a nap because he's not such a bad guy. Once Pete and the nympho find out what happened Stick defends himself by saying "She told me I look like a frog". Pete of course sympathizes with Stick and its a pretty rough ride for the girls from here on in.
Wild Riders is by all means not a good movie. The plot is all over the place and things seem to happen for no apparent reason. The girls have plenty of opportunities to escape and don't take their chances. Instead they try to get away in the most hopeless situations. Then we have a strange mix between sex scenes and rape scenes and it really makes the movie come off as a mess. However exploitation fans should at least feel semi entertained with the excessive violence a rape. Wild Riders has a decent amount of flesh, three rape scenes, lots of woman smacking, gratuitous pot smoking, two strangulation's, gun wound to the gut, a spike through the gut followed by drowning, beatings with classical instruments and a gory eye mutilation scene.
The director of this goes by the name of Richard Kanter and he has a short but sleazy director's filmography. He would later go on to do a personal favorite hardcore porn film of mine with Kay Parker and John Lesslie called Untamed. The two villains in this one surprisingly were the opposite with lots of credits to each of their names but the one that they were in together was Blood Mania which I am also a fan of.
Wild Riders is worth a watch for true fans of trash cinema. Everyone else might be annoyed by the lack of plot and just find it offensive. 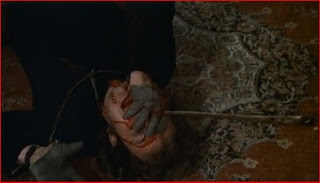