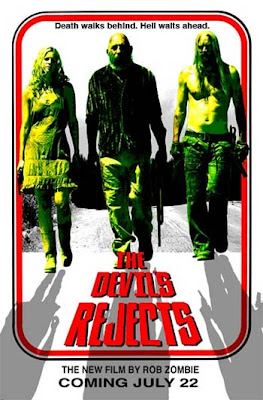 Rob Zombies sequel to House Of 1000 Corpses surpasses the first film and is one of the best movies to be widely released in theaters in the past 10 years. This gritty follow up shows the Firefly family on the run from the police after a bloody shoot out on a ranch that is reminiscent of the Manson family hideout, Spahn Ranch.
Devils Rejects pays much homage to Manson and other serial killers. Its also filled with nods to cult/horror flicks of the 70's. Zombie casts, Michael Berryman, P.J, Soles, and Ken Foree. Bill Moseley and Sid Haig remain but unfortunately we lose Karen Black on this one. 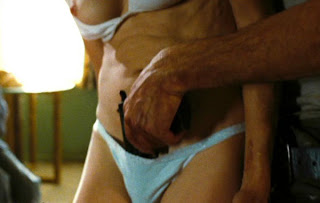 Right from the beginning Devils Rejects plays as a more serious less cartoonish 70's style horror film. Once the family takes to the road they kidnap a group of people and torture them in a hotel room. Bill Moseley and Sheri Moon reenact scenes from movies like Last House On The Left where they force a girl to hit her friend. Theres also a pretty disturbing rape scene where Bill Moseley forces Priscilla Barnes to perform oral sex on him while he puts his gun in places that it just shouldn't go (unless of course you have seen Nick Zedds Fingered). Barnes is eventually killed with a knife through the heart. Another girl is forced to wear a human face. A guy is shot in the back of the head and another has his brains beaten in with a blunt object right after Moseley shits all over his religion and quotes Tex Watson "I am the devil and I'm here to do the devils work". We also have a great scene where Sid Haig punches P.J. Soles in the face and torments her young child. XXX actress Ginger Lynn also shows up in here as a prostitute who rides Sid Haig and blows his brains out in a dream sequence. Elivabeth Daly (from Pee Wees Big Adventure) also plays a foul mouth hooker and she gives Mr. Moseley a ride.
Eventually the Firefly family is caught by the local sheriff who has a vengeance to take out on the family and it all ends in the Bonny And Clyde nihilistic shoot out with lynyrd skynyrd's Free Bird on the soundtrack.
Rob Zombie was a pretty promising director with a good first feature and a better follow up. To bad he went the way of the money and does shitty Hollywood remakes. Devils Rejects is his best film and I'm sure it will remain his only good film. 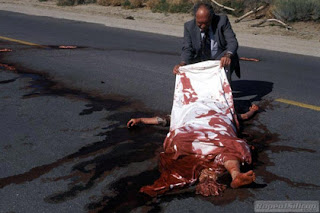