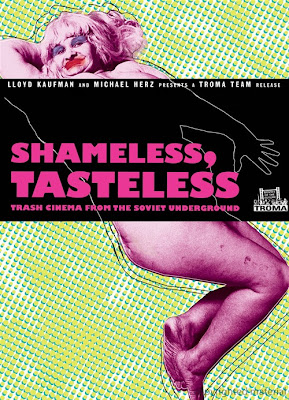 Yes its all there in the title of this filthy compilation from the Soviet Union. The one thing that seems to go largely unnoticed is that director Yakov Levi is not in fact Slavic. He is actually Canadian and simply chooses to direct his brand of smut in the Soviet for financial and controversial reasoning alone. P.S. his real name is Jeff...

A large amount of these Yakov short films stars Baba Alla or better known to the fans of these trashy movies as "The Sexy Babushka" Now be warned, there is nothing sexy about Baba Alla at all and I guess that is the main focal point of interest here. She is sort of like another version of John Waters favorite Edith Massey but The Sexy Babushka might be slightly more disgusting. Baba Alla is willing to bare it all and it takes a strong stomach to make it through some of her screen presence. Nasty! The Sexy Babushka's two most  infamous titles are Shameless and Tasteless, hence the dvd title but she also appears in a short called Matroshka Dolls Of Doom which is pretty damn shitty and doesn't even really offer up any laughs. Baba also appears in a whole shit-load of extras on this disc of doom. 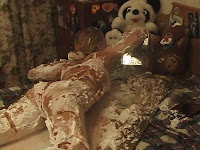 Its also pretty obvious that Yakov Levi is a pretty big pervert and especially fixated on lesbians. Just about every other short film on this disc is about lesbianism. Some of the dyke excursions that is on display here come from titles like Vanity Insanity and The Ghost Of Marquis De Sade. The big down side is that none of these babes really get naked. These films although very perverse are also very softcore. The girls basically hang out in their underwear, make out and rub each other. This is the sort of thing you would expect from a 60's tease-o-rama flick or something. I would assume this has to do with Slavic censorship or the film festivals. Otherwise I'm sure these sick flicks would be loaded with tit.

The best short out of the whole pack is a movie called The Killer Bra. It has some pretty funny moments in it and it also shows some bare breasted bimbos. This one is about a girl who's bra is haunted by the soul of a dead women who wants revenge. The lead actress basically does all of the action scenes topless and while its all a bit pathetic it is quite gutsy at the same time. Other then The Killer Bra and the Sexy Babushka stuff these films are pretty wretched and serves as better background visual for a party then an actual watch. 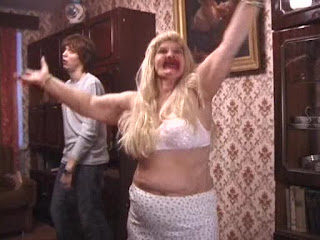