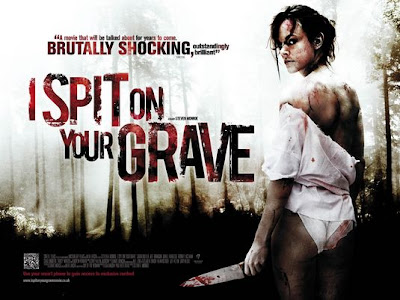 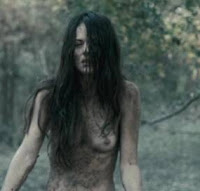 This 2010 remake wasn't quite as bad as the remake of Last House On The Left but then again that's not really saying much. This one was at least watchable with believable actors and story line that obviously shows the creator was a fan of the far superior original.

The first half of the movie plays very true to the 70's flick with the exception of an added hand held video camera. We also get an added character as a villain, so this time our heroine can "Cut, Chop, Break and Burn five men beyond recognition". If you remember correctly the brilliant exploitation tagline lied to us the first time around with only four victims. The rape scenes are lifted directly from Meir Zarchi's classic with only the order of attacks being rearranged. The rape scenes themselves are also very much dulled down. They are no where near as painful to watch as the original but we do get some of the lingering camera work that made the aftermath of the rape scenes seem so realistic in the original.

What happens next is never explained or justified but our rape victim gets away and survives in the woods with no clothes food or water for months. Next time she appears she is quite healthy with a new wardrobe.?.? She takes her revenge on the scum that brutalized her and left her for dead, started with Matthew the retard. By the way Matthew is very believable in the remake and the best scene in the whole movie is when Matthew busts a screaming nut into our rape victim. Anyway, Matthew is strangled with a noose and looses consciousness an tied to a chair. (Lets see if you can follow me now) Matthew's hand is tied to a shotgun trigger that is rammed up another mans ass who is also tied to a chair. If Matthew the tard moves... Bang! Its blown out assholes for lunch. This scene reminded me a bunch of Kiss Of Her Flesh. The scene where a man has his penis tied to the trigger of a rifle. Thanks to the help of a little strip tease our victim gets a hard on and blam! If inspiration was found in the great Findlay's Flesh Trilogy I will give credit where it is due but still these murders are way to elaborate and ridiculous for a rape/revenge movie. Why does every movie have to play like a Saw movie?

Anyway, another guy is tied up and has his teeth pulled out and is eventually castrated. In my humble opinion this also does not live up to the infamous castration scene from the real movie. Next a man is suspended above a bathtub that is filled with lime and water. Yes he looses face. In the most brutal and satisfying of all the revenge scenes a man is (you guessed it) tied up. He is tied to a tree and has fishing hooks through his eyelids. Next he has dead rodents shoved into his mouth, fish guts mashed into his eyeball wounds and eventually big cgi birds come and eat his eyeballs from his bleeding sockets. This scene was pretty cool despite the directors sick bondage fetish.

What it all comes down to is that I Spit On Your Grave is another pointless remake from the 2000's. Skip it and hold your self respect with the original.

Email ThisBlogThis!Share to TwitterShare to FacebookShare to Pinterest
Labels: I Spit On Your Grave (2010), Night Of The Woman, Rape Revenge