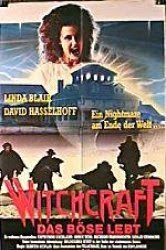 This Italian witch-flick is definitely not Susperia. Linda (Exorcist) Blair is pregnant and off to a remote island to check out the new house that her family is investing in. The local legend is that the house is haunted by an evil witch. This of course turns out to be true. When Blair and her family arrive at the haunted house they bump into David (Knight Rider) Hasselhoff and his virgin girlfriend who have been loitering at the house and taking pictures of the strange phenomenon and bizarre happenings on the island. Its not long before we get a bunch of silly Witchery and other unexplained evil happenings.

Not only is Linda Blair pregnant in this one but Witchery is from what I refer to as the Linda Blair shoulder-pad years. This thing came out the same year as Blair's Grotesque and it looks like she lifted the shitty wardrobe right out of that movie. In other words she wears giant bulky clothing and is totally unattractive in this movie. If you are looking for sexy Linda Blair, stick with Savage Streets or Chained Heat but there will be no boobage on display from a witchy Blair. On the other hand her giant 80's hair gets even bigger as the film goes on and it becomes more and more obvious that she is in fact a witch herself. Witchery was also marketed as Ghousthouse 2 but apparently has nothing to do with the first Ghoshouse film. I personally have not seen the procedor so I can not judge.

What I do know is that if Ghousthouse is half as bad as Witchery I never want to see it. We do get some bare breasts is a ghost rape scene which naturally reminded me of The Entity. We also have a woman who has her lips sewn shut and a another murder that shows a girl impaled on a swordfish statue in true Abominable Dr. Phibes fashion. The best moment of gore involves some voodoo doll antics and a man spewing blood from multiple stab wounds.

This thing also comes complete with an Exorcist ripoff ending with a possessed Linda Blair leaping to her death from a window. Oh and Hasselhoff also meets a bloody end when he has a candle stick shoved through his torso. A candle stick? Ill stick with Susperia for a much better witchy time from Italy.