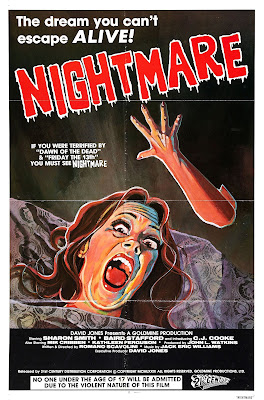 Nightmare also known as Nightmare In A Damaged Brain is one of those infamous big-boxed video nasties from the 80's. Its loaded with gore and other tasteless happenings.

The early 80's of course was the high point for slasher films. They were gruesome and gory and that's why we love them. While equally disturbing slash-em-up flicks like Maniac and Prowler have long ago had they're very own quality release, Nightmare ran the bootleg circuit at horror conventions. I myself am yet to see a nice cleaned up print of this thing. I have seen an old vhs copy and bootleg copies from the vhs days which just further blur the insane bloodletting out. Either way Nightmare In A Damaged Brain is a fun watch and one can't help but get nostolgic while watching it. Why can't they make quick, nasty little gems like this anymore? It really is a thing of the past and it is to bad.

Nightmare follows a young man in a mental ward who is having some very nasty dreams. Or are they flashbacks? About his childhood. He walks in on his mom and pop while they are indulging in some kinky S&M. I guess the role-play is what damaged his brain... Naturally the disturbed young boy runs out to the shed, grabs an axe and hacks his parents to bits in bloody detail. The doctors keep him hopped up on pills and its not long before our madman is on the loose and killing young sluts on 42nd street. He eventually makes his way down to Florida to finish off the rest of his family in true Halloween fashion.

The truth is the movie is kind of slow going until our killer has his final showdown in the FL. house. This is when the gore really picks up and we have a total blood bath on our hands. Our killer strangles a young boy (Awesome!), Slits some throats (complete with gurgling gore), goes axe crazy (complete with decapitation), Next he buries the axe in a achy-breaky skull (complete with tons of splatter), we also have a claw hammer through a hand and a gun happy little boy (lots of gory bullet wounds). There is also a character who looks a lot like Tommy Chong and he even says "Mellow out" in a very much called for piece of dialogue. There is some typical babysitter neglect followed by sex and a bit of tit to keep the earlier slow parts moving.

Nightmare In A Damaged Brain is a must own for all slasher fanatics and splatter hounds alike! Its fucking gory! Fans of this movie are sure to like the Spanish slasher Pieces.