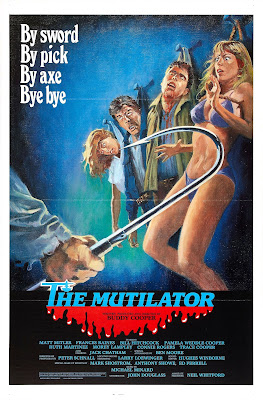 You don't pick a movie like The Mutilator out because you are looking for something in high art. You picked this one because you wanted a cheesy 80's slasher film filled with senseless violence and over the top gore. Well that's pretty much what you get here. 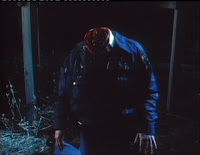 The first time I saw this movie I wasn't the biggest fan. That was due to the fact that it was cut to pieces with the majority of the red stuff cut out. Now that I have finally seen this thing fully intact I can at least appreciate the gore factor.

The Mutilator also known as Fall Break falls into a certain slasher sub category for me along with movies like Nightmare In A Damaged Brain where they almost start to get annoying after a while and you just await the next murder scene. This would usually mean that the movie isn't any good but it almost works in the benefit of the film because when you actually get the murder (depending on how gory it is) it is usually that much more satisfying. So if it wasn't for the absurd amount of gore these movies wouldn't be worth a shit. They don't work alone the way a movie like Halloween or Black Christmas works. 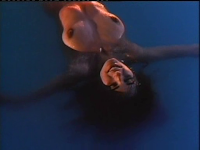 This one follows the oh so familiar slasher formula of five teenagers on a vacation in a vacant cabin. They start getting knocked off one by one by the demented father of one of the teenagers.
We get one scene of nudity and the rest of the time we are forced to look at some of the worst dressed women I have ever seen.
Luckily for us most everybody dies in a gruesome fashion. One girl has a giant hook shoved up her vagina and it comes out somewhere from her mid torso. Another guy is chopped and sawed to bits with something that resembles a chainsaw. Bodies are cut in half and heads go-a-rollin. One of the most effective gore scenes shows a cigarette lighter melting away the flesh on a hand. Nasty! Throats are slit and spikes are run through achy-breaky skulls. We get one dead cop and another has his leg chopped off.

The Mutilator comes complete with a totally twisted ending. It really has to be seen to be believed. I think aside from the hook in the vagina the opening and the ending are the two best moments in the film. The mid section is filled with annoying actors and a really shitty song that plays way to many times for its own good. Only recommended for gore hounds and slasher obsessed maniacs. 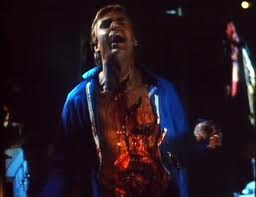