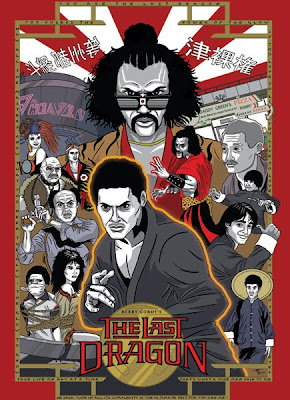 The poster art displayed above is not the original art at all. It was drawn out by a fan-boy in hopes to sell some copies of his work at a local screening of The Last Dragon. I however find it to be way cooler then the original American art or even the Spanish poster.

The Last Dragon used to play regularly on television when I was a young kid. For some reason or other my father wouldn't allow me to watch it. My old man has always been big on censorship but looking at this movie now I really have no clue to why my father wouldn't let me watch this movie. Perhaps pops was a bit of a racist... Then again he also wouldn't allow me to watch wrestling when I was a kid. I guess he really just had something against exaggerated violence in movies, even if it was a silly {PG13} 1980's flick. All I know is there really isn't anything all that realistically violent and its a pretty goofy movie all the way through. After all it was the 80's. What wasn't goofy from that time? 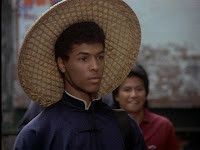 The Last Dragon tells of a young African American martial artist named Leroy Green who worships the great Bruce Lee. Naturally he calls himself Bruce Leroy and that's what the folks around town know him as. Bruce Leroy follows the philosophy of the real Bruce Lee and vows to never use physical violence against another human unless there is no other choice. Needless to say there is no other alternative once Leroy crosses paths with an angry street punk named Sho'nuff "The Shogun Of Harlem". Sho'nuff wants Leroy in a street fight and will stop at nothing to get what he wants. He destroys Leroy's family pizza shop and eventually kidnaps his girlfriend. Leroy has no choice but to give The Shogun Of Harlem what he wants. 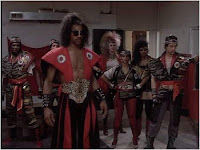 There are a lot of really cool scenes in this movie. My personal favorite moment takes place in a kung-fu, movie-house which is screening Enter The Dragon. We get a bad-ass fist fight in the movie theater which I have been lucky enough to witness in real life. Unfortunately there wasn't any crazy martial arts going on when I witnessed this. Maybe that's because Dead Alive was playing rather then a kung-fu classic.

Aside from the fact that The Last Dragon has some cool moments it isn't really a great movie. The main problem is that between the kung-fu scenes we have all these shitty musical numbers. It almost plays like a musical or a bad MTV video.

This thing was directed by the guy who did Cooly High and Which Way Is Up which would explain why The Last Dragon is more of a comedy then anything you can take seriously. It does offer up some excellent midget-fu, really silly dialogue "Kiss my converse" and scenes from much better movies like The Big Boss and The Chinese Connection. Check it out if you want some cheap laughs with your kung fu but be sure to fast forward through all the shitty singing and dancing. This ain't Bollywood!