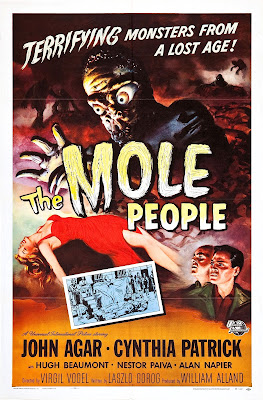 Here's another silly 50's monster movie staring John Agar. One year prior he would fight Tarantula and the gill-man in Revenge Of The Creature. This time around he will go to war against an ancient civilization who worship Ishtar, the same god from Blood Feast. He will also have to fight the creatures that dwell beneath the earth known as The Mole People. 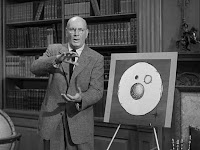 This thing opens up with some old geyser talking about the world we live in and the philosophers of the past who tried to understand how it all worked. The opening seems like a lecture and if I didn't know any better I would have guessed that this bald geek was somebodies teacher. Well apparently he was just an actor who did a few things here and there for television shows. The Mole People is really the only thing he has ever done worth while and while many might find the opening to be an annoying waste of time, I sort of enjoy it for that added touch of weirdness that makes these movies oh so much better.

Moving along from the old fart and the strange opening. John Agar plays an archaeologist who discovers an underground city from five thousand years ago while on an expedition on a mountaintop in Mesopotamia. 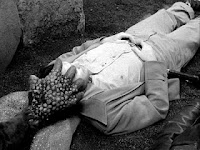 The only problem is that the city is not abandoned. It is inhabited by a blood thirsty civilization that worships Ishtar. Like Fuad Ramses from Blood Feast there are human sacrifices offered to Ishtar. Unfortunately we don't get an Egyptian feast in this one but what we do get is a bunch of hunchback Mole People with giant, razor-sharp finger nails.

The Mole People are being starved and held captive by the people of Ishtar. They are beaten and whipped and forced to burrow and find food for the people. Apparently this city lives strictly off of mushrooms. They have never seen day light and the fact that they live underground leaves them with a very limited diet.

The plot is silly as usual but the movie does offer up sharp claws to a scientist chest, a man who falls deep into a cave and is crushed and killed by falling rocks, poisonous mushrooms, a women who is burned alive from sun raise, gratuitous whipping and a moralistic ending that comes complete with a Mole People revolution. I'm being serious! John Agar helps these monsters gain their independents. Guess he was tired of blowing them up all the time.