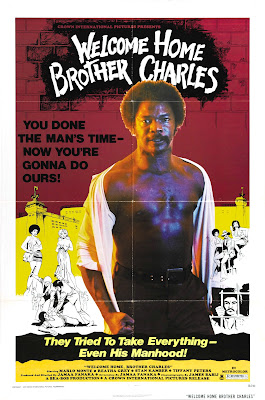 Here's a weird one from Jamaa Fanaka (Penitentiary). This twisted blaxploitation flick tells of a black man named Charles or "Brother Charles" who is apprehended by the white police and of course brutalized. They nearly beat him to death upon his capture and go as far as to castrate him. 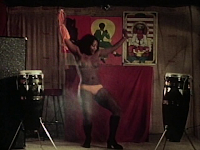 Well at least they try to castrate him.?.? Once Brother Charles time is served he hits the streets and learns that his old bitches are being pimped by the new players in town. Brother Charles claims he is going to live a straight life without drugs and hookers but in reality he is planning his revenge on the scum that nearly took his manhood.

There is no doubt that Soul Vengeance also known as Welcome Home Brother Charles is a movie from mars but no matter how bizarre it is, the truth is its a pretty boring movie. This is amongst the earliest of Fanaka films and the ineptitude and the total lack of money really shows through and not necessarily in a very good way either. 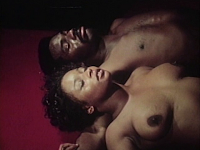 Right off the bat the main character is supposed to be a ladies man but he is no Fred Williamson. I think Brother Charles has to be just about the ugliest man in blaxploitation history. The Hamburger Pimp in Dolemite is more likely to get some pussy then this dude. Then again whats in appearance?

Okay so this cat gets all the bitches and luckily for us that means we get some nudity. Not so lucky for us some of these girls look like Brother Charles with less facial hair. Yuck! We get some titty swinging at the local "Bottomless Bar" which isn't bottomless at all. We get some sweet, jive 70's jargon and some real smooth cats in some super-bad clothes. We have some of the worst white people in blaxploitation history and a ending that will shock your cock off.

Its never explained in great detail or even very clearly but apparently when the pigs tried to cut off Charles penis, they left it hanging on. For some reason while Charles was behind bars his rocket grew to abnormal size and he acts out his vengeance with his giant black wang. Brother Charles uses his giant garden hose of a cock to hypnotize the wives of the police who did him wrong. Then he strangles the cops with his penis and that's pretty much the whole movie.

If it wasn't for the final revenge scenes Soul Vengeance wouldn't be worth a dime. Add in some dead cops and strangulation by a vengeful penis and we have something worth watching. Maybe not more then once but I find it to be a nice little novelty amongst my stacks of tasteless exploitation flicks! This one reminded me of a blaxploitation version of Deadly Weapons. They would make an excellent double feature. Revenge through giant black cock and revenge through giant mellon heavy jugs. Genius! 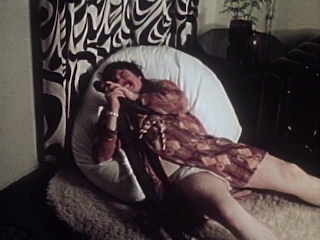