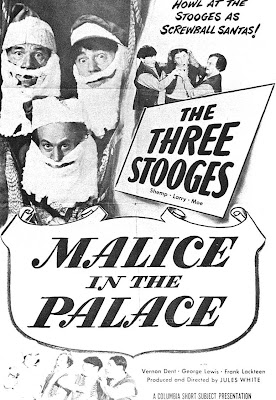 Malice In The Palace is one of the most popular of all Three Stooges shorts. This is mainly due to how long it has been available in public domain dollar disk sets but personally it is one of my least favorite shorts from the trio.

Moe, Larry and Shemp run a restaurant and their next guest are a couple of thieves who are plotting out a jewelery heist and murder. The Stooges catch wind of the idea and disguise themselves as Santa Clause's and steal the Jewel from a giant black man armed with a big sword.

Malice In The Palace has some funny bits in it. Especially when they turn a guard in the palace into a human water statue. They fill the guards bloated belly with water and when they punch him in the gut water spews continuously from his mouth like a pissing cupid statue. Then we have a very memorable moment in the restaurant where Larry chases cats and dogs around with a big meat cleaver. Shemp is almost wasted space in this one. We don't get any of his famous Shemp, wobbly-knee foot-work. For me Larry really steals the show this time around. 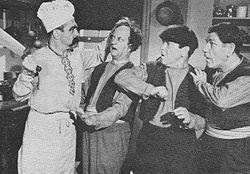 Email ThisBlogThis!Share to TwitterShare to FacebookShare to Pinterest
Labels: Malice In The Palace, Shorts, Three Stooges