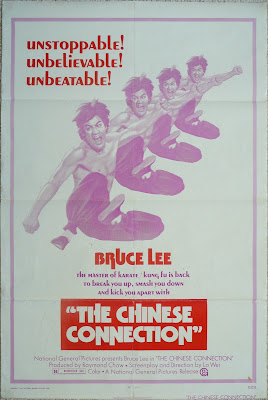 Chinese Connection also known as Fist Of Fury, not to be mistaken for Fists Of Fury which is The Big Boss comes out one year after the success of The Big Boss. With Bruce Lee becoming a rising star in Hong Kong it was absolutely necessary for Lee to do another film. 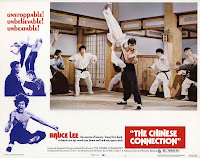 Bruce plays a martial artist who is distraught over his teachers death. When he learns that the Japanese are responsible for the murder of his beloved teacher he makes a vow to kill them all off on his own.

This in its self is quite the stretch from The Big Boss. If you remember correctly in that film Lee swears to a passive lifestyle until he is forced to break it at the end. Fortunately for us there is much more Bruce Lee kung fu from early on but on a down note The Chinese Connection is nowhere near as graphically violent as its predecessor . There certainly isn't much gore on display and it also lacks in the nudity department. For these reasons I think I prefer the more exploitative Big Boss but The Chinese Connection is still an okay watch for Bruce Lee's presence alone.

There are a bunch of typically goofy moments that come complete with bad dubbing, not the best of acting and a classic scene that shows Lee twisting his foot on an enemies head as if he were putting out a cigarette. We also get the famous hypnotic scene where Lee moves his arms about and leaves psychedelic trails for our viewing pleasure.