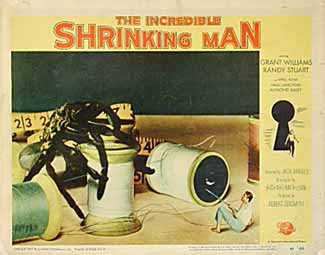 50's science fiction and horror films have this certain charm to them. They can be so fun. Filled with monsters, giants, killer animals and in this case very, very little people but they are almost wholesome at the same time. Perhaps it was the innocence of that decade or was it just a break from the more serious horror films of the 30's? What ever it was it is pretty hard to not love these movies.

Horror veteran Jack Arnold whose titles consist of such classics as Creature From The Black Lagoon, Tarantula, Revenge Of The Creature, Monster On Campus and even Boss Nigger directs this timeless classic about a man who is subjected to some radio activity and shrinks little by little every day until he is to small to even defend himself against a small insect. The theory was brilliant and probably as fun to play with special effects wise as was The Invisible Man in the 30's. Of course competitors would follow up quickly with a tale about an incredible growing man only months later with The Amazing Colossal Man but it is this movie that put giants and midgets on the sci-fi map. 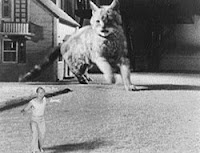 You really have to give these film makers credit. As ludicrous as the idea seems you really buy in to it due to how well and proportioned The Incredible Shrinking Man turned out in the end. The scene where our little man who is now living in a child's doll house is attacked by a regular house cat is amazing. They make this cat look like Godzilla compared to our main character and it really does work.

We also have the unforgettable fight scene between The Shrinking Man and a spider. The Shrinking Man uses a sewing needle as a sword and it makes for one hell of a fight. The film is also jam packed with other obstacles for our small man to overcome. A spilled drink is like swimming across a river and climbing up stairs is out of the question. A must see for anyone who digs these crazy 50's sci-fi flicks. Watch him now until he is to small to find!