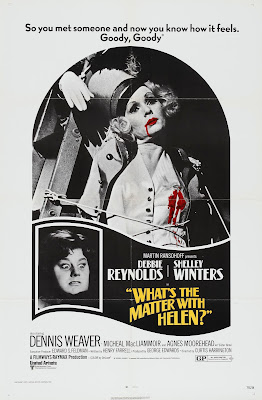 Ever want to see Shelly Winters as a ape-shit psychopath? Well here's your chance. This one was directed by Curtis Harrington, the same lunatic who gave us the incredibly bizarre Denis Hopper flick Night Tide. He also went on to do a bunch of odd television movies like Killer Bees and Devil Dog : The Hound From Hell.

Whats The Matter With Helen? plays like a typical Harrington flick in the sense that its weird enough to hold your attention but its a little on the soft side as if it was intended to be acceptable for television. For this reason alone the film gets knocked down a few pegs. Everybody knows that a good horror flick is trashy and gritty. This film is more of a thriller then a horror movie and is slightly to classy for its own good. Whats The Matter With Helen isn't exactly a bad movie. The characters are well enough developed and the story is interesting enough to hold the attention of the average mongoloid. Its just to bad that they didn't go down the stalk and slash route. Instead this movie plays like a less memorable version of Misery.

This one tells of two women who's sons committed a brutal murder and are arrested by the police. There are some angry people amongst the towns folk who want revenge and who better to take it out on then the mothers of the murdering bastards. The two women take off for Hollywood where they will change they're identities and open up a dance school for young talent. It is then that the two women learn how different they really are. Shelly Winters plays the hyper religious Helen and yes there is something the matter with her. Debbie Reynolds plays the glamorous blond who is as obsessed with the high life as Helen is in the lord. They continue to be stalked and its not long before they become murderers themselves. We get a twist ending that really isn't all that satisfying and a pretty downbeat climax.

The film offers up stabbings, a rabbit massacre (complete with lots of fluffy, white bunnies with their throats slit), a man is pushed into some sharp blades on a old time gardening vehicle (complete with red stuff), we have achy-breaky skulls in a scene where a man is pushed down the stairs and we get plenty of mental health issues from Shelly Winters.

Not the worst thing you could watch but only recommended for people who prefer classy thriller type movies over sleazy horror flicks from the 70's. For more trashy time with chubby-slasher-mamma's you could always try Crazy Fat Ethel. Email ThisBlogThis!Share to TwitterShare to FacebookShare to Pinterest
Labels: Best Of Friends, Box Step (The), Mystery, Whats The Matter With Helen