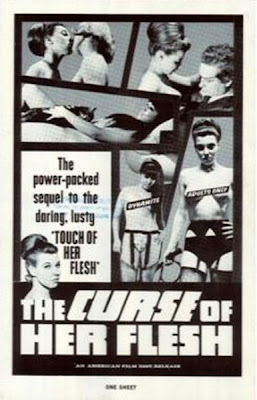 This is the second film in Michael and Roberta Findlay's ultra trashy Flesh trilogy. In case if A Touch Of Her Flesh wasn't quite sleazy enough for you, feast your eyes on this sick! sick! sequel! 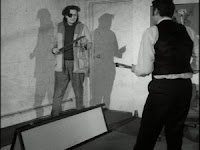 Michael Findlay is back yet again as the depraved misogynistic serial killer Richard Jennings. If you remember he correctly he lost his eye in the first film. So he is back as the eye patch killer and he is still pissed that he caught his wife cheating on him.

Women are trash and Jennings must rid the world of this filth. Naturally he runs a scummy strip club that offers up sleazy S&M shows complete with bondage and violent whippings. He also likes to roll around with naked babes on the couch in his best suit before killing them.

For those unfamiliar with the series, The Flesh Trilogy is amongst the sleaziest and meanest of all roughie sexploitation films, right up there in the ranks with the Olga movies.

Curse Of Her Flesh is a fine example of film making in bad taste. Its loaded with bare breasted 60's babes in big underwear. We also have lots of filthy dialogue. Add in some ultra violence and we have high entertainment right out of New York City's sewer. This movie should probably be avoided by feminists and politically correct drones alike. You are bound to be offended.

One of the weirdest scenes in the movie involves a women being probed with a giant vegetable. I am pretty sure it is a squash or something of the sort. The film comes complete with fine locations such as the bathroom which always manages to have the toilet bowl in frame. It really adds to the feel of the movie. We also get a movie within the movie and it involves a female genital operation. Then there is some machete violence and some insane laughter. Fans of this movie must be sure to see the third film in the series Kiss Of Her Flesh. It is the most grotesque in the whole series. Pure fucking filth! 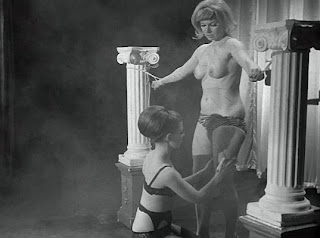 Email ThisBlogThis!Share to TwitterShare to FacebookShare to Pinterest
Labels: Curse Of Her Flesh, Roughies, Sexploitation