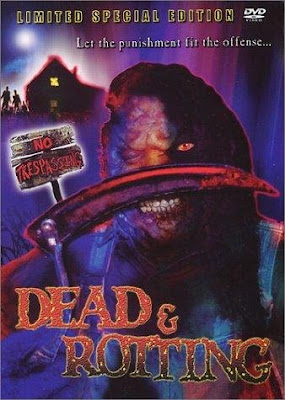 For some unknown reason I picked this shot on video and straight to video piece of rot up in the early 2000's when it first came out. For some stranger reason I have not thrown my copy out. Every time I go back and watch this movie with the intentions of disposing of it after my viewing, I end up putting back on the shelf into my collection.

Perhaps it is scream queen Debbie (Terror Firmer) Rochon's breasts that make me want to keep this movie. Or is it the really cheesy gore. I think it is a mix between the two and the fact that Dead & Rotting is sort of a Pumpkinhead ripoff.

Troma-boy Trent Haaga (Terror Firmer, Citizen Toxie : Toxic Avenger 4) gets into a bit of trouble along with his two buddies when they beat up the son of an evil witch (Played by Debbie Rochon). The witch places a curse on them and they all get sick. They take they're revenge against the witch by paying two pot-head losers to kill her cat. Little did they know that the cat was in fact the witch's son. The witch places another curse on them. This time much more serious. Now they will learn what is like to "Be dead & rotting".

Dead & Rotting is filled with awful acting and even worse dialogue. Who ever wrote this thing would probably be better off Dead & Rotting as well. On the other hand it is chock full of cheesy monsters and bad gore. It holds a certain charm for me in a very strange way. If you are feeling risky and shifting through piles of shitty shot on video movies from the 2000's you could do worse then this. Sorta... Oh and beware there is some senior citizen nudity on display in this one. Ouch! 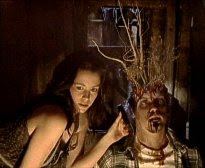