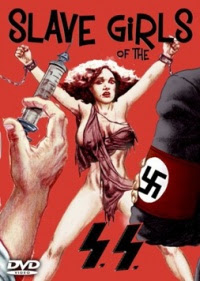 When it all comes together Sex Slaves Of The S.S. makes for a very confused movie. For the most part the movie is a mystery. The director is unknown as is most of the cast. The main character goes by the name of Dr. Ivan Cock Luv and is played out by one of the only confirmed actors, Jerry Delony who would go on to do one of the Ilsa movies (Ilsa Harem Keeper Of The Oil Sheiks).
Dr. Ivan Cock Luv is assisted by a weird little fucker that goes by the name of Fritz (also an unknown actor). I am not quite sure if Fritz is played by a man or a woman. He has a fake looking mustache but at the same time has some very feminine features. Fritz also looks a bit like a midget. The truth is I'm not exactly sure if Fritz is even human. All I do know is that the character is quite disturbing to look at and I feel pretty bad for anybody who was trying to pull pud to this thing in the local smut-theater.

Together Dr. Cock Luv and Fritz perform "experiments" on three female prisoners and by experiments I mean they order S.S. soldiers to have sex with them... What the hell are they researching here anyway? They also set up an early sex machine but it is never used for penetration. Who's bright idea was that?

Next we have a bunch of footage that was obviously taken from another source. This footage is really the best material in the whole movie. We have a woman who has been whipped into a bloody mess that is forced to perform oral sex on a Nazi. Then in another piece of footage we have a guy in a gay biker hat screwing a fat, hairy bitch. I guess they thought biker hats resembled head-wear from the Nazi party. We also have one of the most unconvincing lesbian scenes in cinematic history and to top it all off the After Hours dvd release of this added in some silly voice overs that does nothing more then help botch this mess of a movie up just a tad more. 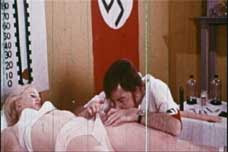