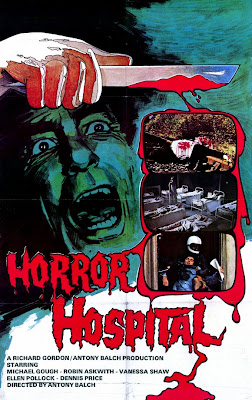 Horror Hospital is a twisted British gem from the 70's. Sleaze wise it falls in the ranks of Peter Walker films and even stars a Walker familiar (Robin Askwith) from The Flesh And Blood Show. This time Askwith plays a long haired rocker named Jason who is off for some sun and fresh air on what the English call a holiday. In fact it is a "Hairy holiday" as it is advertised in the film. A holiday for the youth. The only problem is Jason doesn't get much relaxation. Instead he ends up in a strange hotel with a lunatic scientist that must have got his schooling from Dr. Frankenstein.

Before Jason's arrival at the Horror Hospital he meets up with a sexy young British slag named Judy. Don't worry guys the VHS box doesn't lie. Judy gets naked in a gratuitous shower scene that comes complete with bush and a typical horror film jump-scare.

Michael Gough (Legend Of Hell House) plays the mad scientist who practices his absurd brain surgery on the youth and makes them into his own instruments of pleasure. Of course they are in a zombie like state and not to pretty to look at. They come complete with white face paint and big scars down their forehead's where the scalpel ripped the flesh. We also have a bunch of guys running around in leather motorcycle gear, complete with boots, helmet and leather jackets. These guys serve as body guards for wheelchair ridden Michael Gough. Was Michael Gough actually in a wheel chair in 1973? I find it odd that he is cripple in both Hell House and Horror Hospital. We also get a midget-slave and a monster running around for added fun. The midget serves as pure entertainment in what was supposed to be comical scenes but I find it pretty funny when he is whipped in the face with a riding crop.

While I wouldn't exactly call Horror Hospital a splatter film it is pretty gory. We have open brain surgery, an axe to the head and multiple decapitations from a unproportioned and completely ridiculous contraption that is built into the doctors car. The car comes complete with giant switchblades that pop out from the side of the car and sears heads off. The severed heads land perfectly into a basket that is also hanging from the car. We also have a pretty nasty burn victim and a zombie meltdown as well. Horror Hospital also goes under titles such as Computer Killers, Doctor Bloodbath, Dr. Frankensteins Horrorklinik, and many other foreign titles. I however prefer Horror Hospital since that is how I first saw it in the VHS days. Directed by Anthony Balch the same madman who gave us the incredibly strange Bizarre Secrets Of Sex, or the artsy-fartsy Towers Open Fire and the annoyingly awesome The Cut Ups with William S. Burroughs. Anybody familiar with Balch's work would know that Horror Hospital is going to be a weird one and a must see. Check it out for a trashy good time with gore, monsters and midgets. 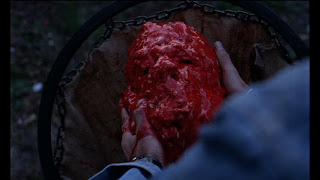