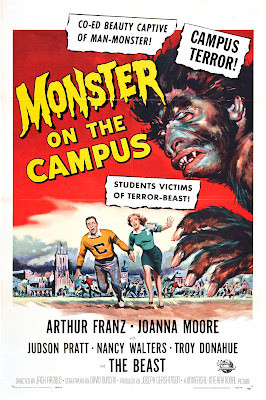 Jack Arnold is one of the best horror/sci-fi directors of the 50's. Responsible for classics such as Creature From The Black Lagoon and Tarantula. Monster On The Campus comes one year after The Incredible Shrinking Man but unlike The Shrinking Man, Monster On Campus is a bit more violent. 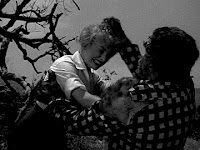 By no means can one take any of these silly 50's monster movies seriously but this one is just a touch more violent then most. The monster pulls women by the hair and throws them around. Then there is also the fact that our monster chooses a hatchet as a weapon of choice and in the films greatest moment the short handled axe is embedded into a mans face. Ouch! The scene comes complete with a bit of gore and the camera tends to linger on the corpse with the hatchet wedged into the achy-breaky skull for just a moment more then would be expected. 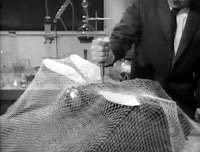 On the other hand this one tends to bore a bit in the earlier half with far to much dialogue and silly chit-chat about "Mans inner beast" and all that nonsense. The story itself is kind of dumb but when it comes time for all out monster mayhem it all becomes worth while.

For those of you who would like to become a axe wielding monster some day, all you have to do is mix the blood of a prehistoric fish with some ultra violet rays and blam! You will be a hairy ape-man with a lust for blood and blond chicks before you know it. We also have some really funny pieces of dialogue that may or may not have been intentionally humorous. Monster On Campus is no where near the best from Jack Arnold but fans of this type of movie could do a lot worse.